The adventures of Hajjî Baba of Ispahan 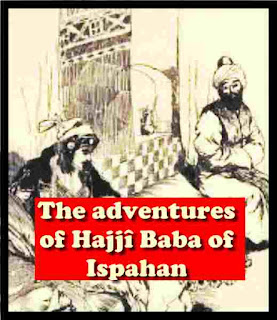 From the biographical introduction:
The beginning of this book) as the engraved copper plate, worn by long use, continues to repeat its first impression. Parts of the picture have from much use become indistinct, some details have been obliterated, but the whole subject is there. Doubtless, since Morier's time, the wearing out of the plate has proceeded more rapidly, and the impression is more blurred and broken, but still, this perpetuating of the storied past is the source of the peculiar interest which the study of oriental life has for the restless and progressive peoples of the West.
To visit the East is still to step back into the vanished centuries, to see with our own eyes the actual mode of life of those bygone ages, and the very scene of those remote events and romantic incidents which have the charm of pious association and familiarity that flow from an early introduction to Holy Writ and Eastern fable.
Thus such a book as the Adventures of Hajji Baba makes an appeal to memory and imagination that literature dealing with foreign countries other than Asiatic, or with newer peoples, cannot be put forward. For while it is true that for the student of humanity no people or country is unworthy of observation, still for most of us Palestine and Persia possess an interest which Central Africa and South Sea Islands lack.
When the author of Hajji Baba first began to write, public interest in Persia was more acute than it had ever been before or probably has been since. Bonaparte was still the terror of Europe and master of the greater part of it, and his agents ( M 566 ). Hajjî Baba had reached the Court of Persia, where they were intriguing with the Shah in a manner that boded no good to our Indian Empire.
It became necessary, therefore, to enter upon a contest with France in the domain of diplomacy as well as on the battlefields of Spain, and the nation watched the struggle with anxiety. There was consequently a ready audience for the information which a member of the mission to the Persian Court had to convey, and the reception of Morier's first book of travels was doubtless to some extent influenced favourably by this cause. Nor, perhaps, had the interest thus awakened entirely died away when Hajji Baba appeared; but the book has secured a place in English literature, and, under its own merits, survived any temporary interest which the foreign politics of the time may have lent it. The general outline of Morier's career is well known, but the accessible materials for a complete history of his life are not plentiful. A biography was not the inevitable penalty of distinction in Morier's time, and no detailed memoir of his life has been given to the public. James Justinian Morier was one of four brothers, three of whom were devoted to the diplomatic service. He was born about the year 1780 (the exact date is doubtful) in Smyrna. His father, Isaac Morier, who finds a place, along with all his four sons, in the Dictionary of National Biography, was a member of an old Huguenot family that had been driven from France at the revocation of the Edict of Nantes and had settled in the Levant. He was born in Smyrna in the year 1750 and became a British subject by naturalization. His wife, Clara van Lennep, James Morier's mother, was the daughter of the Dutch Consul-General and President of the Dutch Levant Company. One of her sisters married William Waldegrave, Baron Radstock, and another became the wife of the Marquis de Chabannes de la palace
The charms of all three have been recorded for us on canvas by Romney. In 1803 Isaac Morier experienced troubles of a financial kind. He is said to have "lost his fortune" in that year, and this led to his becoming Consul-General of the Levant Company at Constantinople, and British consul there when that Company ceased to exist. James Morier, his second son, must at this time have been about twenty-three years of age, and, so far as can be gathered from available records, was engaged in commercial pursuits at Smyrna. He had received his education in England according to the tradition in Morier 's family, at Harrow, like his brothers David and William. Sir Frederic Goldsmid, however, in a biographical notice to a recent edition of Hajji Baba, suggests ground for doubting whether James Morier was ever enrolled at that historic school.
the book details : Download 19.3 MB