Advertising and selling: principles of appeal and response 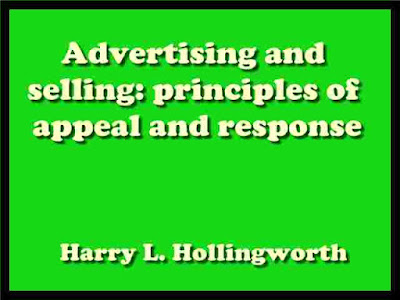 From the introduction:
This book has resulted from the cooperative attempt, on the part of a group of practical businessmen and one or two individuals whose interests were chiefly scientific,
(a) to formulate and systematize those facts and laws which re- late to the processes of appeal and response in the selling and advertising of goods, and
(b) to undertake investigations that might result in the discovery of new facts and principles of both practical and scientific interest. This attempt has proceeded on the basis of four distinct aims, which it is well to have clearly in mind.
These aims have been:
(1) To sort out, from the general body of psychological doctrine, such principles as under- lie the mental processes involved in creating, presenting and reacting to appeals which are presented in the form of advertisements, arguments, selling talks, etc.; to state these in systematic form for convenient acquisition and reference by the active and prospective businessman.
(2) To examine such various methods, media and devices as having proven clearly successful or unsuccessful in known circumstances, places, and with different commodities, and to deduce and formulate any principles revealed by such comparative study.
(3) To carry on, in a cooperative way, new experiments and investigations, by exact scientific methods, and with the definite intention of helping to render the technique of the laboratory more and more serviceable in handling the practical problems of daily business life.
(4) To devise accurate and reliable methods of testing beforehand the probable value of appeals which are intended for actual use in advertising and selling,
(a) by a more exact study of the known principles of appeal and response and their applications in business transactions, and
(b) by a comparison of laboratory tests with keyed results produced by the appeals in business campaigns.
The results of this cooperative attempt are presented in the chapters which follow. The first line of work will constitute the skeleton of the book, and the results of the other inquiries will be introduced by way of illustration and proof of the principles presented. The book is intended primarily for the general reader and for the student with practical rather than theoretical interests.
It does not pretend to present nor even to conform to any particular" system'' of academic psychology but aspires to render more concretely serviceable, within a particular field, the accepted facts, laws and methods resulting from the experimental study of human nature and human behaviour. But it is hoped that the professional student of human nature may also find the motive and method of the book to be at least suggestive, and in that sense valuable. I
n its original form, the book consisted of a series of lectures given, during several successive years, under the auspices of the Advertising Men's League of New York City. This fact determined the practical bearing of the material presented. It is quite impossible to give due credit to all whose work has been of service to the writer in this undertaking. From the practical point of view, the suggestions and criticisms of the members and chairmen of the League Round Tables have been invaluable. On the scientific side, an attempt is made in the bibliography to indicate the chief sources which have been specifically utilized. But I must render particular thanks to the many members of my college classes whose zeal and labour have made many of the experiments possible.
I am under especial obligation to Dr E. K. Strong, Jr., at one time assistant in the Barnard laboratory, and since Research Fellow, in Columbia University^ for the Advertising Men's League and the National Association of Advertising Managers, for his constant interest and assistance, and for a great amount of data, more specifically referred to in the text. But, above all, the very existence of the book, the opportunity of preparing it, and very much of such concreteness and value as the book may contain are due to the untiring activity and the stimulating professional ideals of Mr Wm. H. Ingersol, President of the Advertising Men's League. It was under his leadership that the Round Table Study Course was conceived and effectually organized, and through his suggestions and advice that the course on Principles of Appeal and Response was originally planned.
the book details : Download 13.5 MB