Within an inch of his life 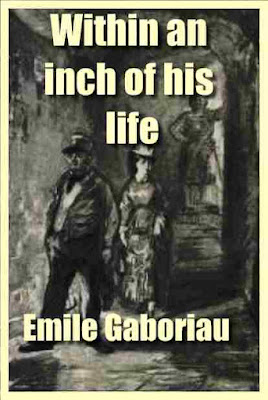 This is a detective novel by Emile Gaboriau
Except:
in the night from the 22d to the 23d of June 1871, towards one o'clock in the morning, the Paris suburb of Sauveterre, the principal and most densely populated suburbs of that pretty town was startled by the furious gallop of a horse on its ill-paved streets. A number of peaceful citizens rushed to the windows.
The dark night allowed these only to see a peasant in his shirt sleeves, and bareheaded, who belaboured a large grey mare, on which he rode bareback, with his heels and a huge stick. This man, after having passed the suburbs, turned into National Street, formerly Imperial Street, crossed New-Market Square, and stopped at last before the fine house which stands at the corner of Castle Street. This was the house of the mayor of Sauveterre, M. Seneschal, a former lawyer, and now a member of the general council.
Having alighted, the peasant seized the bell-knob, and began to ring so furiously, that, in a few moments, the whole house was in an uproar. . .
A minute later, a big, stout servant-man, his eyes heavy with sleep, came and opened the door, and then cried out in an angry voice,
" Who are you, my man ? What do you want ?
Have you taken too much wine? Don't you know at
whose house you are making such a row ? "
*' I wish to see the mayor," replied the peasant in-
stantly. " Wake him up ! "
M. Seneschal was wide awake.
Dressed in a large dressing-gown of gray flannel, a
candlestick in his hand, troubled, and unable to disguise
his trouble, he had just come down into the hall, and
heard all that was said.
" Here is the mayor," he said in an ill-satisfied tone.
" What do you want of him at this hour, when all
honest people are in bed? "
Pushing the servant aside, the peasant came up to
him, and said, making not the slightest attempt at
politeness, —
" I come to tell you to send the fire engine."
" The engine ! "
" Yes; at once. Make haste! "
The mayor shook his head.
" Hm ! " he said, according to a habit he had when
he was at a loss what to do; " hm, hm! "
And who would not have been embarrassed in his place?
the book details :
Download 17.4 MB