Abraham Lincoln: was he a Christian? 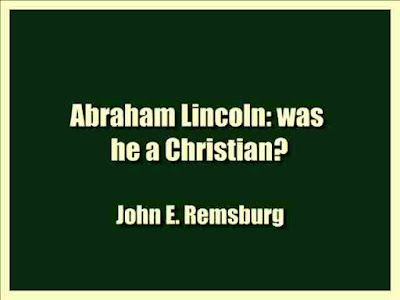 Almost immediately after the remains of America's most illustrious son were laid to rest at Springfield, one of his biographers put forward the claim that he was a devout believer in Christianity. The claim was promptly denied by the dead statesman's friends, but only to be renewed again, and again denied. And thus for a quarter of a century, the question of Abra- ham Lincoln's religious belief has been tossed like a battledoor from side to side.
As a result of this controversy, thousands have become interested in a subject that otherwise might have excited but little interest. This is the writer's apology for collecting the testimony of more than one hundred witnesses, and devoting more than three hundred pages to the question, " Was Lincoln a Christian? "
About few other men have so much been written as about Abraham Lincoln; while no other American's life has engaged the pens of so many biographers. A thousand volumes record his name and refer to liis deeds. In a hundred of these, he is the central figure. Nearly a score of elaborate biographies of him has been written.
As many more books pertaining wholly to his life, his martyrdom, and his character have been published. Of the many works on Lincoln which the writer has consulted in the preparation of this volume, the following deserve to be mentioned: Nicolay and Hay's " Life of Lincoln," Herndou and Weik's " Life of Lincoln," Lamon's " Life of Lincoln," Holland's " Life of Lincoln," Arnold's "Life of Lincoln," Raymond's "Life of Lincoln," Stoddard's " Life of Lincoln," Barrett's "Life of Lincoln," " Every-Day Life of Lincoln," Arnold's "Lincoln and Slavery," Carpenter's " Six Months at the White House with Lincoln," " Reminiscences of Lincoln," "Anecdotes of Lincoln," " Lincolniana," "The President's Words," "The Martyr's Monument," " Tribute of the Nations to Lincoln," "Lincoln Memorial " and "Lincoln Memorial Album."
The testimony concerning Lincoln's religious belief presented in this volume has been derived chiefly from three sources. a part of it has been gathered from the works above named. In a single volume is published for the first time matter which heretofore was only to be found scattered through numerous volumes, some of them inaccessible to the general reader.
the book details : Download 11.8 MB