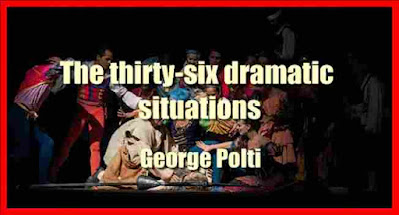 Thirty-six situations only! There is, to me, something tantalizing about the assertion, unaccompanied as it is by any explanation either from Gozzi, or from Goethe or Schiller, and presenting a problem which it does not solve.
For I remembered that he who declared by this limited number so strongly synthetic a law, had himself the most fantastic of imaginations. He was the author, this Gozzi, of "Turandot," and of the "Roi Cerf," two works almost without analogue, the one upon the situation of the "Enigma," the other upon phases of metempsychosis; he was the creator of a dramatic system, and the Arabesque spirit, through him transfused, has given us the work of Hoffmann, Jean-Paul Richter and Poe.
The Venetian's exuberance would have made me doubtful of him, since, having once launched at us this number 36, he kept silent. But Schiller, rigid and. ardent Kantian, prince of modern aestheticians, master of true historic drama, had he not in turn, before accepting this rule, "taken great pains" to verify- it (and the pains of a Schiller!) thereby giving it the additional authority of his powerful criticism and his rich memory?
And Goethe, his opposite in all things save a strong taste for the abstract, Goethe, who throughout his life seems to have considered the subject, adds his testimony years after the death of Schiller, years after their fruitful conversations, at the very time when he was completing "Faust," that supreme combination of contrasting elements.
In France, Gerard de Nerval alone had grasped and presented briefly the ensemble of all dramatic production, in an article upon Soumet's "Jane Grey," in "L' Artiste," written, unfortunately, with what dandyism of style! Having early desired to know the exact number of actions possible to the theatre, he found, he tells us, twenty-four. His basis, however, is far from satisfactory. Falling back upon the outworn classification of the seven capital sins, he finds himself obliged at the outset to eliminate two of them, gluttony and sloth, and very nearly a third, lust (this would be Don Juan, perhaps).
It is not apparent what manner of tragic energy has ever been furnished by avarice, and the divergence between pride (presumably the spirit of tyranny) and anger, does not promise well for the contexture of drama, the manifestations of the latter being too easily confounded with those of envy. Furthermore, murder or homicide, which he indicates as a factor for obtaining several new situations, by uniting it in turn with each of the others, cannot be accepted as such, since it is but an accident common to all of them, possible in all, and one most frequently produced by all.
And finally, the sole title mentioned by Nerval, "Rivalry of Queen and Subject," corresponds, it will be observed, only to a sub-class of one, not of his twenty-four, but of Gozzi's Thirty-six Situations Since Nerval, no one has treated, in Gozzi's genuinely technical manner, of the secrets of invention, unless it is relevant to mention in this connection Sarcey's celebrated theory of the "scene-a-faire," a theory in general but ill comprehended by an age which dreads didacticism, that is to say, dreads any serious reflection upon art; some intimate notes of Dumas fils which were published against his wishes, if my youthful memories are correct, in the "Temps" some years ago, and which set forth that double plot of Corneille and Racine, a heroine disputed by two heroes, and a hero disputed by two heroines; and, lastly, some works here and there by Valin, upon composition. And that is all, absolutely all.
Finally, in brief, I rediscovered the thirty-six situations, as Gozzi doubtless possessed them, and as the reader will find them in the following pages; for there were true, as he had indicated, thirty-six categories which I had to formulate in order to distribute fitly among them the innumerable dramas Awaiting classification.
There is, I hasten to say, nothing mystic or cabalistic about this particular number; it might per- haps be possible to choose one a trifle higher or lower, but this one I consider the most accurate. Now, to this declared fact that there are no more than thirty-six dramatic situations, is attached a singular corollary, the discovery that there are in life but thirty-six emotions.
A maximum of thirty-six emotions, and therein we have all the savour of existence; there we have the unceasing ebb and flow which fills human history like tides of the sea; which is, indeed, the very substance of history, since it is the substance of humanity itself, in the shades of African forests as I have replaced the word "tragic", used in the quotation, with "dramatic". Those familiar with Goethe know that for him one of the "classic" Germans the two terms were synonymous in this passage.
the book details : Download 5.3 MB