A brief textbook of logic and mental philosophy 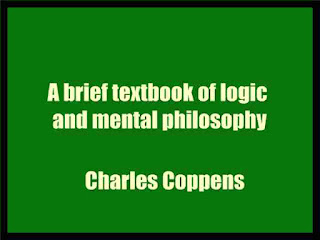 These pages are a modest contribution towards the accomplishment of an important purpose. They are written in compliance with an earnest desire repeatedly expressed in the solemn utterances of our venerated Supreme Pontiff Leo XIII. " the more active," he says, "the enemies of religion are to teach the unlearned, the young especially, what clouds their intellect and corrupts their morals, the more should you exert yourselves to establish not only a well-adapted and solid method of instruction, but a method in perfect conformity with the Catholic faith, especially as regards Mental Philosophy, on which the right teaching of all the other sciences in a great measure depends — a Philosophy which shall prepare the way for Divine Revelation instead of aiming at its overthrow." Thus spoke the Holy Father in his Encyclical "Inscrutabili" at the opening of his Pontificate.
What this Philosophy should be, he soon after explained in a special Encyclical " On the Higher Studies." It should be the Philosophy of the Schoolmen, the system founded upon the teachings of Aristotle, which was carried to its perfection by St. Thomas in the thirteenth century, and which has held its place in most of the Catholic Colleges and Universities to the present day. " Among the doctors of the Schools," he says, " St. Thomas stands forth by far the first and master of all.
To this we must add," the Encyclical continues, " that this Angelic Doctor extended the sphere of his philosophic conclusions and speculations to the very reasons and principles of things, opening out the widest field for study, and containing within themselves the germs of an infinity of truths, an exhaustless mine for future teachers to draw from at the proper time and with rich results.
As he used the same intellectual process in refuting error, he succeeded in combating single-handed all the erroneous systems of past ages, and supplied victorious weapons to the champions of truth against the errors which are to crop up in succession to the end of time."
Of this Philosophy there exist many excellent textbooks in Latin, but very few in the English tongue; the present little volume does not attempt to rival their perfection. Its aim is simply: to present to pupils unfamiliar with Latin a brief outline of a sound Philosophy conformable to the teachings of the Schoolmen.
It was composed before the excellent Stonyhurst Series of English Manuals of Catholic Philosophy was published, but it is chiefly meant for a different purpose, viz.: for class use in Academies and similar institutions, for which that collection of Manuals is too voluminous, though invaluable as works of reference for professors and pupils. The author sincerely hopes that his modest efforts will contribute to the propagation of sound Philosophic learning.