Social organization, a study of the larger mind 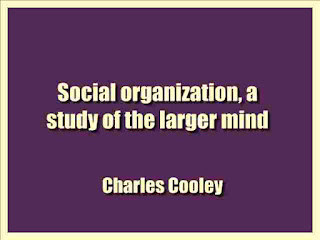 From the preface:
Our life is all one human whole, and if we are to have any real knowledge of it we must see it as such. If we cut it up it dies in the process: and so I conceive that the various branches of research that deal with this whole are properly distinguished by the change in the point of sight rather than by any division in the thing that is seen.
Accordingly, in a former book (Human Nature and Social Order), I tried to see society as it exists in the social nature of man and to display that in its main outlines. In this one, the eye is focussed on the enlargement and diversification of intercourse which I have called Social Organization, the individual, though visible, remaining slightly in the background."
It will be seen from my title and all my treatment that I apprehend the subject on the mental rather than the material side. I by no means, however, overlook or wish to depreciate the latter, to which I am willing to ascribe all the importance that anyone can require for it. Our task as students of society is a large one, and each of us, I suppose, may undertake any part of it to which he feels at all competent.

PART I— PRIMARY ASPECTS OP ORGANIZATION
CHAPTER I
SOCIAL AND INDIVIDUAL ASPECTS OF MIND
Mind an Organic Whole — Conscious and Unconscious Relations — Does Self-Consciousness Come First? Cogito, Ergo Sum — ^The larger Introspection^Self-Consciousness in Children — ^Public Consciousness .3
CHAPTER II
SOCIAL AND INDIVIDUAL ASPECTS OP MIND — (CONTINUED)
Moral Aspect of the Organic View — It Implies that Reform Should Be Based on Sympathy — Uses of Praise and Blame — Responsibility Broadened but Not Lost — ^Moral Value of a Larger View — Organic Morality Calls for Knowledge — Nature of Social Organization .13
CHAPTER III
PRIMARY GROUPS
Meaning of Primary Groups — Easily, Playgrotmd, and Neighborhood — How Far Influenced by Larger Society— Meaning
and Permanence of " Human Nature "—Primary Groups the
Nursery of Human Nature 23
CHAPTER IV
PRIMARY IDEALS
Nature of Primary Idealism — ^The Ideal of a "We" or Moral Unity — It Does Not Exclude Self-Assertion- -Ideals Springing from Hostility — Loyalty, Truth, Service — Kindness — Lawfulness — Freedom — ^The Doctrine of Natural Right — Bearing of Primary Idealism upon Education and Philanthropy 32
the book details :
Download 7.9 MB