The significance of ancient religions 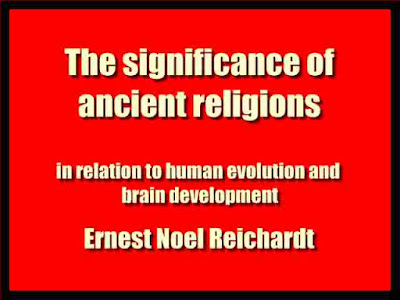 in relation to human evolution and brain development

From the introduction:
The title of this work refers especially to the ancient religions of Oriental Paganism. The revelation of God in the figure of Jehovah is only dealt with, in the first place, to emphasise His complete separateness from the deities worshipped in those heathen cults; and in the second place to show that the conception of evolution which the study of these religions unfolds, leads us to the historic proof of the assumptions of Judaism and Christianity.
The separateness of Jehovah is not sufficiently emphasised in current works on Comparative Religion; and if I am to develop my theme without prejudice, it is necessary that it should be clearly impressed on the reader, and that he should constantly bear it in mind.
For what I propose to show in this work is that these ancient religions embody within themselves a continuous progression of ideas which — studied in the light of all our modern knowledge, and with special reference to their psychological value — completely reveal to us the evolutionary process responsible for the historical progression of humanity. I mean by the historical progression of humanity that perspective of human evolution during the last eight thousand years embraces all the facts established by history, by anthropology, by the study of Comparative Religion, and by archaeology.
These religions are the expression of the development which has actually taken place in humanity during this period. The evolutionary process revealed in these religions is that of one continuous wave of vital energy acting unceasingly on a pre-existing form of life for many thousands of years, and lifting it to higher levels of capacity and intelligence. The process, indeed, bears a striking likeness to that adumbrated in Bergson's "Creative Evolution" — with certain distinctions and differences.
And the practical value of the study of these ancient religions lies in this, that not only does it acquaint us vi^ith the forces that have determined human history and built up human character; it affords us, moreover, the key to all the bewildering problems of modern psychology.
These religions tell us exactly what has taken place in the human brain during this period of development. The evolutionary process — the continuous wave of vital energy — has propagated itself through a series of smaller wavelets, giving rise to the rhythmic growth and decay of great communities, which is the most striking characteristic of human history.
It has added to the human brain a new layer of cells, and it is the progressive development of this new layer of cells, carried on through each successive wavelet, that has given rise to the astounding phenomena of human history. During the first half of the development, this new mass of cells was barred from contact with the outside world by the pre-existing mind-organ; and only gave rise in consciousness to subjective presentations in which it revealed itself, its origin, and the necessities of its existence.
It was these subjective presentations that were the basis of the religious ideas of Oriental Paganism. The great Brahman of the Upanishads — the culminating expression of this development — was the deified Self-consciousness of the individual.
Thus the whole of Oriental Paganism is a self-revelation of the cosmic process operating on the individual. In the second half of the development, the new mass of cells has gradually entered into relation with the outside world. The first step of this new phase showed itself in the Greeks and gave to them that brilliant power of objective ideation which still glorifies them in our eyes.
It was as if in them humanity had been freshly born in a new world which the Oriental nations behind them had never seen, and which they gazed at and handled with all the rapture that accompanies a new sensation. And finally, the increasing objective development of the new mass of cells has endowed us with that enormous grasp over the forces and materials of nature that we possess at the present day. It is especially to be noted that this conception does not imply anything with regard to the exact relation between mind and brain.
The reader may have whatever ideas he likes on this subject without prejudice to the postulate which I have advanced. It is admitted by all psychologists at the present day that the brain is the organ of the mind, and there is only a difference of opinion on the further question as to the exact nature of the relationship.