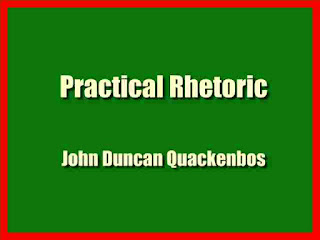 Rhetoric is the Art of Expressing Thought effectively in Words. Its study implies an investigation of the principles that underlie the accepted rules of cultured speaking and writing, together with the application of those rules in practical discourse. In other words, it makes known the secrets of literary effect and teaches us so to present our thoughts as to influence in any desired manner the intellects, the feelings, and the actions of our fellow men.
The Search for the Why. We shall have greater respect for the rules of rhetoric if we understand the principles from which they are derived, and realize that they are not arbitrary and unrelated laws. We shall also find the study of rhetoric, when pursued as a search for reasons, to possess absorbing interest; and we shall learn to take pleasure in the effort to express our thoughts to the best advantage through the medium of written essays. Practice and Formal Study. But it is to be remembered that neither practice in composition writing alone, nor the memorizing of rhetorical rules alone, will equip us for authorship. It is practice controlled by law that makes perfect here.
Rhetorical Laws, whence Derived. As has been indicated, rhetoric presents for our study and observance a great body of laws. These laws are not the arbitrary inventions of a single mind, nor the expression of the ideas of a single nation or epoch; they have been induced from a study of man's greatest literary efforts. Striking passages have been analyzed; the peculiarities which render them pathetic, sublime, beautiful, or otherwise effective, have been investigated; and thus rules have been formed, by which the critic is enabled to judge of other pieces of literature, and the writer is shown how to express his thoughts in such a way as to produce similar impressions.
Aristotle, who was the first to lay down rules for the unity of action in dramatic and epic poetry, did not arrive at them by guesswork, but by close observation of Sophocles and Homer. Perceiving that these writers, by confining themselves in each of their respective works to one action complete in itself, and limited in place and period, awakened deeper interest in their readers than those who combined unconnected facts, he generalized the important principle, that, in the drama and the epic poem, unity is essential to success.
All the rules of the rhetorician have been induced in a similar manner, and are thus based at once on experience and nature. Rhetorical Laws spontaneously Apprehended. Nature spontaneously interprets and applies the law.
The genius of the ancient tragedians instinctively apprehended the great principles of dramatic art, and unconsciously constructed plays in obedience to them. Thus innate power is created under an eternal law, making that law, through the created works, obvious to the critic, and enabling him to point out to future generations the possible paths to success. Great epic poems and great plays were composed before the principles of their construction were discovered and written out in a form admitting of study. Men talked correctly, and reasoned consistently, centuries before there was a book on grammar or logic; but, when a vast amount of literary material accumulated, the inquiry was made into principles. So the art of rhetoric simply formulates the rules which polished writing has developed through ages of progress.
We are not here to lose sight of the fact that the maxims of the books, as thus drawn from the works of successful writers, are based on psychological truths, laws of human nature, which account for the effects of such works. He who instinctively apprehends the conditioning principles, or by the study has made himself familiar with them, is in a measure superior to the critic's precepts.
The rules of rhetoric are authoritative, not because they have governed a few great writers but by reason of their conformity to these immutable principles, principles that are true for all peoples and for all ages. The principles are inflexible; the rules, as will be shown, are to a certain degree elastic.
Rhetorical Art a Second Nature. The laws of rhetoric are nature's laws, and hence do not hamper the free utterance of thought, fettering talent, and making stiff and artificial composers. A writer cannot hope to attain perfection in his art without paying due attention to its rules. But it is not necessary that while at work he should keep these rules constantly before him. The principles of his art should be so familiar to his mind as, without consciousness on his part, to control its action. He thus intuitively avoids what is wrong; while there is nothing to prevent his sentences from being as easy, natural, and unconstrained as those of the loosest and most ignorant scribbler.
the book details :
Download 26.2 MB