Notes on the science of picture-making 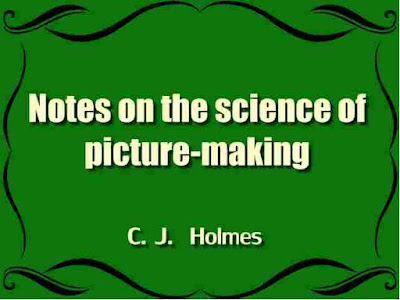 On looking over these old lectures I notice many details which I should now be inclined to alter or to express differently. During the last decade the resources of painting, like those of politics, have been tested to break- ing point, and we shall never be able to regard art with quite the same eye as before. But a cool survey of this aesthetic battlefield shows that, in spite of all the din and debris of conflict, the old landmarks stand just where they did.
One or two may be rather less prominent: that is all. For example, in these pages, Repose is mentioned as one of the characteristics of all great art. So it remains, but the modern taste would certainly give it less importance than Vitality, especially in questions of colour. Colour indeed is being studied as it has seldom or never been studied before.
Persian Miniatures, oriental Carpets, with the art products of Japan and China, have contributed largely to this study, while in the special field of painting men like van Gogh and Cezanne have broken new ground for controversy or enjoyment. So potent indeed have been these influences that for those who feel them strongly, much of the painting which has passed muster for centuries ceases to have any living interest.
It is difficult, for instance, to believe that the typical brownish " Old Master " will ever again excite genuine enthusiasm in any educated lover of art. Even among the great ones of the earth, a similar distinction may someday be drawn, and a Rubens with all his fire and brilliancy of handling will stimulate us less than some vivid primitive, while Filippo Lippi will seem tame and sophisticated in the presence of Angelico.
Indeed Angelico, Uccello, Piero Della Francesca and the young Michelangelo seem now to hold their own, even with the great Venetians, in the matter of colour as well as in design. This change is no mere momentary fashion.
In the matter of design, it is doubtless a natural reaction from the experimental violence, naiveness, or anarchy of the modern schools, which will in time yield or lead to other styles; but in the matter of colour, it is hard to imagine any reversion to darkness and dullness. The untaught collector will, of course, go on buying dingy paintings, as he goes on buying drawings by Copley Fielding or Birket Foster, and will have the usual following of living mediocrities to applaud him; but the demand for such things whether old or modern is a matter of business and has no connexion with or interest for the creative artist.
So far as the classification adopted in this book is concerned, the recent innovations may be treated under the heads of Symbol, of Colour and of Material. Unity of Symbol has been carried to its extreme limit by the reduction of all objects to geometrical terms by the Cubists. Their products thus attained undeniable unity of a kind, and sometimes expressed volume and mass with a certain success: but the unity and the success were of the limited order which may be achieved with a child's box of bricks, and have proved too limited in their range of expression to retain interest even for those who, like Picasso, led the way in exploring.
On purely decorative work, and on textiles, Cubism may leave its mark, for it necessitates the repetition of similar forms and similar tones the essential elements of decorative rhythm, but it is unlikely that it will play any but a subordinate part in the making of pictures. The treatment of contour has been extended in a similar fashion from simplification to distortion, with results that are variously estimated.
Simplification is essential to artistic expressiveness, but a distortion is a dangerous tool. Where it is the result of swift handling and vehement feeling as in an emphatic sketch by Rembrandt or Daumier, it may be magnificent; it may not be incongruous in some fierce rhythmic invention of Greco, of William Blake or of Van Gogh; it is the weapon, par excellence, of all great satirists and caricaturists. To extend its function beyond these clearly defined provinces, to employ it deliberately as a means of avoiding the difficulties of plain narrative, is a mistake.
Every variation from the natural form must, if we are to avoid incongruity, be accompanied by an equivalent variation from natural colour. If the form is simplified, colour must be simplified also: if the form is distorted, the colour change must be equally drastic (p. 43). Here indeed we have a useful touchstone for much modern painting. In the best work of Gaugain and Van Gogh and in the Still-life pieces of Cezanne, this correspondence is maintained. Where contours are simplified, colour is simplified; where colour is forced to an extreme pitch, design and contour are handled with equal daring. Failure begins where the form is distorted, while the colour remains in some degree naturalistic. And colour has assumed, quite rightly, so much importance, that to secure it in its greatest possible breadth and intensity, some corresponding simplification and concentration of design is seen to be essential.
To attain that simplicity and that concentration without sacrificing the plastic and expressive qualities of fine draughtsmanship is the task of the modern artist. Lowness of relief will do much. Much too will depend on the colouring of the shadows. It is recognized now that one of the secrets of the finest and most brilliant colouring, is not to lay stress on the colour of the lights,. but to reserve the most intense tones of colour for the half-lights or the shadows. If the shadows are full of colour, the lights may be almost colourless.
Such painting may lack some of those qualities of recession and relief which we have been accustomed to admire in the painting of the seventeenth and eighteenth centuries, but the gain in general attractiveness of aspect, and in decorative quality, will far more than outweigh the loss.