Out of my life by Paul von Hindenburg 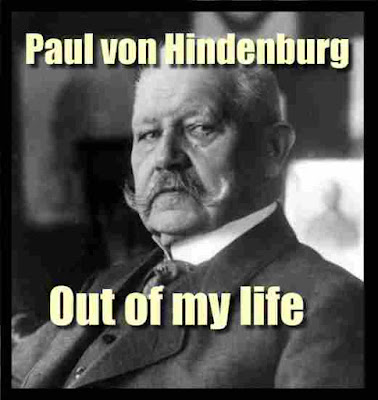 This book is an autobiography of  Paul von Hindenburg who was a German general and statesman who led the Imperial German Army during World War I and later became President of Germany from 1925 until his death in 1934.
The memoirs that follow owe their inception not to any personal inclination to authorship, but to the many requests and suggestions that have been made to me. It is not my intention to write a historical work, but rather to interpret the impressions under which my life has been spent, and to define the principles on which I have considered it my duty to think and act. Nothing was farther from my mind than to write an apology or a controversial treatise, much less an essay in self-glorification. My thoughts, my actions, my mistakes have been but human.
Throughout my life and conduct my criterion has been, not the approval of the world, but my inward convictions, duty and conscience. The following pages of reminiscences, written in the most tragic days of our Fatherland, have not come into being under the bitter burden of despair. My gaze is steadfastly directed forward and outward.
I gratefully dedicate my book to all those who fought with me at home and in the field for the existence and greatness of the Empire.
One spring evening in the year 1859, when I was a boy of eleven, I said goodbye to my father at the gate of the Cadets' Academy at Wahlstatt, in Silesia. I was bidding farewell note to my dear father only, but to my whole past life. Overwhelmed by that feeling, I could not prevent the tears from stealing from my eyes. I watched them fall on my uniform.
" A man can't be weak and cry in this garb," was the thought that shot through my head. I wrenched myself free from my boyish anguish and mingled, not without a certain apprehension, among my new comrades. That I should be a soldier was not the result of a special decision. It was a matter of course. Whenever I had had to choose a profession, in boys' games or even in thought, it had always been the military profession.
The profession of arms in the service of King and Fatherland was an old tradition in our family. Our stock the Beneckendorffs came from the Alt- mark, where it had originally settled in the year 1289. From there, following the trend of the times, it found its way through the Neumark to Prussia.
There were many who bore my name among the Teutonic Knights who went out, as Brothers of the Order, or "War 3 4 Out of My Life Guests," to fight against heathendom and Poland. Subsequently, our relations with the East became ever closer as we acquired landed property there, while those with the Marches became looser and ceased altogether at the beginning of the nineteenth century. We first acquired the name " Hindenburg " in the year 1789. We had been connected with that family by marriage in the Neumark period. Further, the grandmother of my great-grandfather, who served in the von Tettenborn Regiment and settled at Heiligenbeil in East Prussia, was a Hindenburg.
Her unmarried brother, who once fought as a colonel under Frederick the Great, bequeathed to his great-nephew, on condition that he assumed both names, his two estates of Neudeck and Limbsee in the district of Rosenberg, which had originally fallen to Brandenburg with the East Prussian inheritance but had subsequently been assigned to West Prussia. This received King Frederick William II's consent, and the name " Hindenburg " came into use through the abbreviation of the double name.
As a result of this bequest, the estate at Heiligenbeil was sold. Further, Limbsee had to be disposed of as a matter of necessity after the War of Liberation. Neudeck is still in the possession of our family today. It belongs to the widow of one of my brothers who was not quite two years younger than I, so that the course of our lives kept us in close and affectionate touch. He too was a cadet and was permitted to serve his King as an officer for many years in war and peace. During my boyhood, my grandparents were living at Neudeck.
They now rest in the cemetery there with my own parents and many others who bear my name. Almost every year we paid my grandparents a visit in the summer, though in the early days it meant difficult journeys by coach. I was immensely impressed when my grandfather, who had served in the von Langen Regiment after 1801, told me how in the winter of 1806-7 as Landschaftsrat he had visited Napoleon I. in the castle of Finckenstein nearby to beg him to remit the levies, but had been coldly turned away. I also heard how the French were quartered in and marched through Neudeck. My uncle, von der Groeben, who had settled on the Passarge, used to tell me of the battles that were fought in this region in 1807.
The Russians pressed forward over the bridge but were driven back again. A French officer who was defending the manor with his men was shot through the window of an attic. A little more, and the Russians would have been crossing that bridge again in 1914
the book details : Download 18 MB