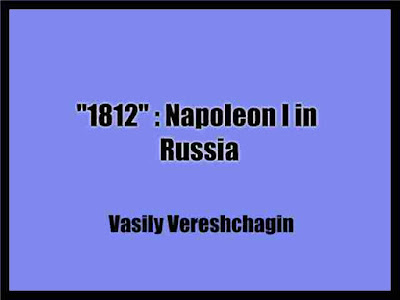 From introduction:
The following pages are not offered to the reader as a history of the invasion of Russia by Napoleon. They are but the statement of the basis of observation on which M. Verestchagin has founded his great series of pictures illustrative of the campaign.
These pictures are now to be exhibited in this country, and the painter has naturally desired to show us from what point of view he has approached the study of his subject — one of the greatest subjects in the whole range of history — especially for a Russian artist.
The point of view is — inevitably in his case — that of the Realist; and this consideration gives unity to the conception of his whole career and en- devour. He has ever painted war as it is, and therefore in its horrors, as one of its effects, though not necessarily as an effect sought in and for itself. He has tried to be " true " in all his representations of the battlefield. His work may thus be said to constitute a powerful plea in support of the Tsar's Rescript to the Nations in favour of peace. My meaning will be best illustrated by a short sketch of M. Verestchagin and his work, as a painter, as a soldier, and as a traveller.
He was born in Novgorod, in 1842, of a well-to-do family of landowners. The son wished to be an artist; the father wished to make him an officer of marines. As the shortest way out of the difficulty, he became both. 1 le passed his work-hours at the naval school, and his play-hours at a school of design, working at each so well that he left the naval school as the first scholar, won a silver medal at the Academy of Fine Arts.
He entered the service, but only for a short time, and he was still three }-cars under twenty when he quitted it to devote himself wholly to art. He was a hard-working student, though he always showed a strong disposition to insist on working in his own way. When Gerome sent him to the antique, he was half the time slipping away to nature. He played truant from the Athenian marbles to flesh and blood. In the meantime he was true to the instinct — as yet you could hardly call it a principle — of wandering from the beaten track in search of subjects.
They were not to wait to be attacked but to boldly assume the offensive, and sink or drive off the big gunboats. It was a most dangerous duty, and when Verestchagin asked permission to serve in one of the launches the officer in command tried to deter him. " Russia has many hundreds of officers like me," he said, " but not two painters like you." Verestchagin, however, was allowed to have his way.
The launch he chose was very swift; it went almost at the speed of a train. It soon came in sight of one of the gunboats, to the great terror of the Turkish crew. They could be seen running about the deck shouting and shaking their fists at one another. The gunboat turned tail at once, but the little torpedo-launch gained on it every moment. By this time the whole Turkish force had taken the alarm, and a fire was concentrated on the little launch both from the gunboat and the banks of the river, under which it was evident she could not live.
She pushed on, however, shoved the torpedo under the bows of the Turk, and — it hung fire. It touched her fairly, but the wire connecting with the fuse had been cut in half b)' shot. Having done this, or rather having failed to do it, the launch was carried away by the tide, and just as she got clear of the vessel the Turks renewed their awful fire from ship and shore. Verestchagin suddenly felt a sickening sensation, as if he had been roughly pushed, and putting his hand to the place found a wound that would admit his three fingers.
At this moment the crew of the Russian launch saw another Turk- ish monitor coming towards them, and firing as she came so that they stood a good chance of being caught between these two monsters — as they might fairly be called in relation to the size of the launch. However, the launch turned and ran, closely pursued by the nearest gunboat, which she had amiably tried to destroy. The pursuer was fast gain- ing on them in their crippled condition, when, at a turn in the river, they saw a little creek. They made for it and were saved. The gunboat could not follow for fear of going aground.
Publication date 1899
Publisher London : W. Heinemann
Download 12.6 MB