A guide to the Montessori method 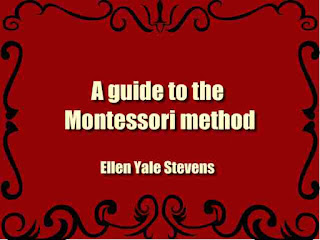 It is more than twelve years ago that an illuminating course in Educational Psychology which I took under Professor John Dewey, then of the University of Chicago, directed what had until that time been on my part only a general interest in psychology, toward the specific question of the relation of various educational theories to the truths of child psychology.
The interest so directed was further stimulated by my relations with Professor Thorndike of the Teacher's College in connection with his courses in methods there. The subsequent years of experience as principal of a school that includes a kindergarten and primary department in its curriculum, and as a teacher of elementary psychology to the older pupils, have given concrete opportunities for putting theories into practice.
The last fifteen months have been largely devoted as time permitted to an intensive study of Dr Montessori and her principles of education including not only her book, "Pedagogica Scientifica, " and its translation into English,
"The Montessori Method of Scientific Pedagogy," 1 but a three months' trip to Italy where I had the advantages of personal conferences with Dr Montessori and the best exponents of her "method," and also of extended visits to all the schools in Rome where her methods have been introduced.
My belief in the value of her theories and methods is based upon a conviction which this study and observation have deepened, that her educational principles have a firm philosophical and psychological foundation; a belief which my experiments with American children since my return, have still more intensified.
My only excuse, therefore, for adding one more to the books which have already been published as a result of the growing interest in England and America in this remarkable woman and her theories, is that in none of them have I found such testing of these theories and methods by the principles of modern child psychology as to me seems necessary for an accurate estimate of their value. Neither have I found in them a sufficient emphasis placed on the spirit which animates the " method."
I also make some suggestions for possible amplification and adaptation to the pressing needs of our own country which are the outcome of an experiment made last summer in using the material with a group of American children. I also venture to hope that such an inter- pretation of Dr Montessori's educational theories and practice will disabuse the minds of its readers of many misconceptions which have arisen since the first introduction into America of the "Montessori Method." Acknowledgements are due to Miss Anne E. George, first Montessori directress in America and translator of "The Montessori Method/' who by her enthusiastic and practical help changed my first general interest in the subject into a keen desire to go to Italy and study Dr Montessori and her work. My thanks are due, also, to several others who have read the manuscript and proofs and helped me with their suggestions and criticisms.
the book details : Download 9 MB