Modern theories in philosophy and religion 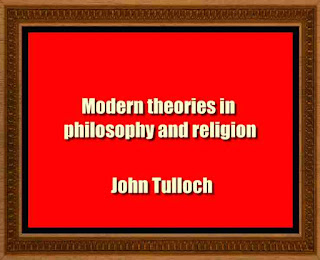 These Essays have a common object; and I have thought them, therefore, worthy of being published together. The same principles more or less reappear in them all, and these principles seem to be of great importance.
The question with which they deal in the diverse application is the great question of contemporary thought, in comparison with which all other questions are of the little moment — Is there a spiritual world? Is there a metaphysical as well as a physical basis of life
Is Reason or Soul, in other words, an entity, arid not a mere manifestation of nervous force — a life behind all other life, and not merely the highest and most complex phase of natural life?
All the naturalistic systems of thought so prevalent at the present time assume a negative answer to these questions. They speak of mind or spirit or consciousness — they cannot help doing so, but they mean by such language merely a phenomenon — a phase of natural being — never a spiritual entity or reality, distinct by itself, and essentially belonging to another and a higher state of being.
Metaphysic is flouted as mere verbalism. Religion is discarded along with Metaphysic, or at least religion in the old sense. This is the drift of the modern spirit — the " Zeitgeist," as it is called. It has penetrated philosophy, literature, religion itself; and men and women, in numbers, are trying everywhere to satisfy themselves with theories spun out of the naturalistic web supposed not merely to confine life, but to constitute it. One might use the words of Bishop Butler with reference to the allied but very different state of thought in his own time, and say,
" It has come, I know not how, to be taken for granted by many persons, that Christianity is not so much a subject of inquiry, but that it is now at length discovered to be fictitious," — at least "• among all people of discernment." Beyond what man can know by his senses or feel by his higher affections, nothing, it is alleged, can be known. Facts, or supposed facts, of the external world or of our inner life, are to be accepted; but all inferences from these facts which would carry us into a transcendental, spiritual, or metaphysical region, are to be rejected.
The existence of an unseen world, or of beings higher than man, is at best problematic and admits of no verification. This naturalistic or agnostic principle is especially identified with " Positivism," and has been launched on its modern career by Auguste Comte more than by any other thinker. The principle itself is by no means new,1 and there are many modern thinkers now identified with it who disclaim any lineage with the great Positivist. My estimate of Comte will be found in its proper place. It is not, in some respects, a lofty estimate. But it is impossible to refuse to him the credit — if credit it is — of having, more than any other man, created the modern movement.
The speculations of Mr Herbert Spencer, the essays of Professor Huxley, Dr Tyridall, and others, are largely independent, and would possibly have been what they are if the " Positive Philosophy " had never appeared.
They are inspired by a motif of their own, and I have no wish to claim for these writers discipleship which they repudiate. Their own range of genius is such as not to need the invocation of any name save their own. It is nevertheless true that the agnostic inspiration of the nineteenth century has come, above all, from Auguste Comte> and that his " Positive Philosophy " is its most complete expression.
Comte had that indomitable enthusiasm, amounting to fanaticism, often possessed by great teachers, which comes from the inrush of new ideas, or ideas supposed to be new, and gives them a missionary impulse. He is the prophet of our modern Naturalism, and we must go back to his writings if we would study the springs of the movement, and understand something of the hold which it has taken of our age.
the book details : Download 23 MB