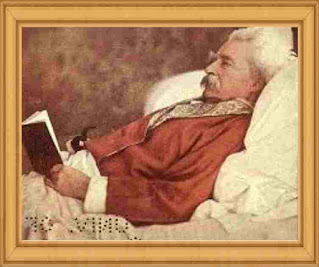 There are today, all over the world, men and women and children who owe a debt of almost personal gratitude to Mark Twain for the joy of his humour and the charm of his personality. In the future they
will, I doubt not, seek and welcome opportunities to acknowledge that debt.
My own experience with the works of Mark Twain is in no sense exceptional. From the days of early childhood, my feeling for Mark Twain derived first solely from acquaintance with his works, was a feeling of warm and, as it were, personal affection. With limitless interest and curiosity, I used to hear the Uncle Remus stories from the lips of one of our old family servants, a negro to whom I was devotedly attached.
These stories were narrated to me in the negro dialect with such perfect naturalness and racial gusto that I often secretly wondered if the narrator were not Uncle Remus himself in disguise. I was thus cunningly prepared, " coached " shall I say, for the maturer charms of Tom Sawyer and Huckleberry Finn.
With Uncle Remus and Mark Twain as my preceptors, I spent the days of my youth excitedly alternating, spell-bound, between the inexhaustible attractions of Tom, Huck, Jim, Indian Joe, the Duke and the Dauphin, and their compeers on the one hand; and Brer Rabbit, Sis Cow, and a thousand other fantastic, but very real creatures of the animal kingdom on the other. I felt a strange sort of camaraderie, of personal attachment, for Mark Twain during all the years before I came into personal contact with him. It was the dictum of a distinguished English critic, to the effect that Huckleberry Finn was a literary masterpiece, which first awoke in me, then a mere boy, genuine respect for literary criticism; for here was expressed an opinion which had long secretly cherished, but somehow never dared to utter! My personal association with Mr Clemens, comparatively brief though it was an ocean voyage, meetings here and there, a brief stay as a guest in his home gave me, at last, the justification for paying the debt which, with the years, had grown greater and more insistently obligatory.
I felt both relief and pleasure when he authorized me to pay that debt by writing an interpretation of his life and work. It is an appreciation originating in the heart of one who loved Mark Twain s works for a generation before he ever met Samuel L. Clemens.
It is an interpretation springing from the conviction that Mark Twain was a great American who comprehensively incorporated and realized his own country and his own age as no American has so completely done before him; a supreme humorist whoever wore the panache of youth, gaiety, and bonhomie; a brilliant wit who never dipped his darts in the poison of cynicism, misanthropy, or despair; constitutionally a reformer who, heedless of self, boldly struck for the right as he saw it; a philosopher and sociologist who intuitively understood the secret springs of human motive and impulse, and empirically demonstrated that intuition in works which crossed frontiers, survived translation, and went straight to the human, beneath the disguise of the racial; a genius who lived to know and enjoy the happy rewards of his own fame; a great man who saw life steadily and saw it whole.
the book details : Download 13. MB