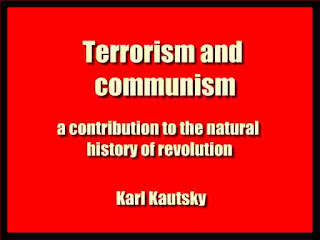 a contribution to the natural history of revolution

From the author introduction:
The following work was begun about a year ago, but was dropped as the result of the Devolution of November 9; for the Revolution brought me other obligations than merely theoretical and historical research. It was only after several months that I could return to the work in order, with occasional inter- ruptions, to bring this book to a close.
The course of recent events did not minister to the uniformity of this work. It was rendered more difficult by the fact that, as time went on, the examination of this subject shifted itself to some extent. My starting point represented the central problem of modern Socialism, the attitude of Social Democracy to Bolshevik methods. But since Bolshevism had, of its own accord, referred to the Paris Commune of 1871 as being to some extent its precursor and its prototype, and as having received the sanction of Marx himself, and since the Commune is little known and understood by the present generation, I undertook to draw a parallel between the Commune and the Soviet Republic.
In order to make the Commune comprehensible, I had to refer to the Paris Commune, and afterwards to the French Revolution and its Reign of Terror. This gave me fresh means for another parallel to the Soviet Republic; hence an examination of the Commune led to an examination of Terrorism, its origin and its consequences. Thus there are two lines of thought which become merged in this book, the one occasionally leading away from the other.
At first, I felt this to be rather disturbing and even considered whether it would not be better to divide the work into two separate sections, the one representing the exposition of the Commune, the other a discussion of Terrorism. However, in regard to my starting point, the Soviet Republic is in such very close connection with these two events in history, that it seemed to be impossible to treat them separately. I hope therefore that, in spite of the difficulties inherent in the dual nature of this book, I shall have succeeded in preserving uniformity in the structure of the thoughts contained therein. However academic the reader may think of many of my illustrations and expositions, they are all of the highest practical importance, especially at such a wildly fermented time as the present. This does not mean to say that I have adapted, as it were, the truth to the needs of the moment.
Instead, I have always sought, even in those sections where I was referring to a period long past, to treat only of that side of the subject that seemed calculated to throw light upon the chaos that surrounds us. If we regard only this chaos as it exists in Russia and Germany at the present moment, our prospects at the moment and our future must be very far from cheering.
We see a world sinking under economic ruin and fratricidal murder. In both countries we find Socialists under the Governments acting against other Socialists, with similar cruelty to that practised more than half a century ago by the Versailles butchers of the Commune cruelty which has earned the most laudable indignation of the whole International Proletariat ever since. Nevertheless, the outlook becomes brighter so soon as we consider the International.
The workers of West Europe have arisen. It rests with them to accomplish actual results, only with more worthy methods than those practised up to the present in the East. Hence it is necessary that they should learn from us, and that they should learn to recognise the different methods of struggle, as well as of construction, by their results. It is not so much a blind adulation of the methods of the Revolution
Contents:
I. Revolution and terror 1
Ii. Paris 3
Iii. The great revolution 13
Iv. The first Paris commune:
The Paris proletariat and its fighting methods 20
The failure of terrorism 31
V. The traditions of the reign of terror 43
Vi. The second Paris commune :
The origin of the commune 53
Workmen's councils and the central committee 67
The Jacobins in the commune 74
The international and the commune 78
The socialism of the commune 90
Centralisation and federalism 100
Terrorist ideas of the commune 111
Vii. The effect of civilisation on human customs: Brutality and humanity 121
Two tendencies 127
Slaughter and terrorism 133
The humanising of conduct in the nineteenth-century 140
The effects of the war 149
Viii. The communists at work :
Expropriation and organisation 158
The growth of the Proletariat 172
The dictatorship 182
Corruption 187
The change in bolshevism . .. 198
The terror 208
The outlook for the soviet republic ... 214
The outlook for the world revolution .. 221
the book details : Download 12.2 MB