Japanese life in town and country 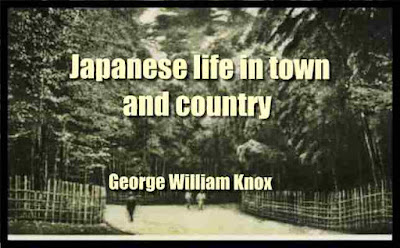 From the introduction:
Our neighbours on the west, separated from us by the widest ocean, are separated from us also most completely by race, environment, and history. It becomes an axiom, repeated by travellers and enforced by scholars, that the Occidental cannot understand the Oriental. How, then, shall we of the extreme West understand the farthest East?
The current phrase in Japan has it that the longer one is there the less does he know of the land and the people, the old resident confess- ing ignorance and leaving confident judgments to the newcomer. The confession may be the modest expression of the scholar who with growing knowledge is increasingly aware that he is master of only a fraction of his subject or more likely it is the outcome of indolence and impatience, indolence which, finding first impressions wrong, is unwilling to take the pains necessary to master the data for a mature and correct opinion, and the impatience which arises from disappointment as the charm of the beginning yields to the disillusionment of a prolonged residence.
Thus is created a belief that an inherent unlikeness in psychology differentiates European from Asiatic. The axiom is supported by wide experience, the differences in judgment being extraordinary and seemingly permanent. Japan, for example, is the delight of tourists; its art, its customs, its scenery, its people have a charm to which all but the exceptionally unresponsive traveller yield.
When after its long seclusion it was once more accessible it was like the apparition of another world. Even now, when so much is changed, the novelty remains, and besides, the very transformation affects us like a fair}^ tale. The novelty, and mystery, and romance are the joy of the traveller, and he has no wish that the fairy tale is translated into the language of every day, nor that Japan be shown to be only a portion of our prosaic and commonplace world.
When, however, he decides to dwell in Japan his point of view changes. The picturesque ceases to fascinate, the novelty wears off, the climate is enervating and productive of discomfort and disease; the beauty of the mountain and plain no longer so appeal to him as he thinks them the product of a ceaseless seismic activity (the more one knows of earthquakes the less one likes them); the politeness appears superficial and insincere, and business relations leave ever>^thing to be desired. He prefers China, where one can trust the merchants, or almost any land east or west. He lives, in the foreign settlements, in an atmosphere charged with hostility to the " natives," and the longer he remains the less can he sympathise with the enthusiasm of travellers. He thinks of them as mere visitors at an elaborate play, while he lives behind the scenes.
Of course, the difference is in the point of view. Japan is strikingly unlike the West, and this constitutes its charm to the tourist and its offence to the resident. Its standards of life differ from our own as does its scener\' from that of our American plains, and the differences in etiquette, in ethics, in business methods, in religion, and in general in views of life, cause clashes which are unpleasant and ma}^ be disastrous.
Hence, if one would hear the most unflattering account of the Japanese, he should listen to residents of long-standing who may be supposed to speak with authority. Nor is a public opinion among foreign residents much influenced by the convictions of a few who have gone over completely to the Japanese ways of life, and use, with the zeal of proselytes, their views of the superiority of Japanese art, morality, women, and religion to disparage the civilisation they have renounced.
To the average resident, such men live in a dreamland of their own, and not in the real Japan of broken contracts, trials, constant disappointments, endless postponements, and general disillusionment. The few in their turn retort that they only penetrate the heart of things, and that if the majority does not agree the fact is immaterial, and merely shows an inability to see and an incapacity to understand.
A fourth opinion is possible when Japan is no longer judged by its possibilities for furnishing new sensations, nor by our standards and its capacity to minister to our gain and needs, nor as an Oriental paradise where artistic and poetic fancies are realised, but as a part of our common humanity; or better, when it is not judged at all but is studied that it may be understood. Such a purpose can be formed only as we surrender our axiom, for if the West cannot understand the East that is the end of it; but at least the axiom can be accepted only when it is proved, and we may better begin with the more ancient phrase that nothing human is foreign to us.
There was a time when Japan was enveloped in mystery and when ignorance was pardonable. For a decade and more after the " open ports" were thronged with foreigners, and the Powers had their representatives diplomatic and consular, and the missionary societies were numerously represented, all — merchants, diplomatists, and missionaries — were dealing w^ith unknown quantities. Naturally grotesque blunders and serious errors were made, the Japanese understanding us as little as we understood them.
the book details : Download 11.2 MB