Idealism and the modern age 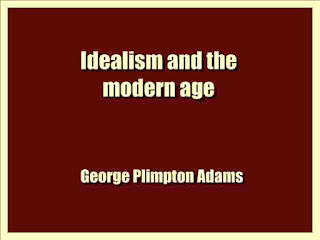 This essay is intended to offer, in substance, an analysis of an idea that lies at the centre of much modern thought and life. In the main, it is only the theoretical aspects of this modern idea that are here examined.
The essay began to take definite shape before August 1914. During recent months the conviction has increasingly been borne in upon the author's mind that it is this same idea on its practical side, in industry and in politics, which lies behind the Great War, now provisionally ended. It is this same idea that also lies behind innumerable sinister forces which are bending every effort to ensure that the world shall return as speedily as possible to the status quo ante. "Examining the bonds of sympathy and interest which unite the reactionary forces, we find them centred in the arbitrary 'will to power.' " Thus wrote Mr John A. Hobson but a few months ago.
It is impossible to be profoundly dissatisfied with much of the main current of modern philosophy and not, at the same time, be radically critical of the eventuation of the modern forces in the established economic and social fabric. Idealism in philosophy should connote a wide understanding of and a generous sympathy for the forces primarily those of common life and labour which are rapidly gathering strength to challenge the "arbitrary will to power" lying at the root of so much within the established order.
That challenge calls for an articulate philosophy. Many who vigorously repudiate the entire apparatus of idealism have made and are making solid contributions to the formation of such a philosophy. One of them a leader since the death of William James it has been the author's privilege to know for the first time during the last few months.
Some of his views are criticized in the pages which follow, and there is, quite certainly, nothing here which would meet with his approval, should he chance to turn its leaves. Yet, the author likes to think it not wholly impossible to unite in a common undertaking all who see the imperative need for building up a future world order wherein genuine democracy shall be more than a name. I have to thank the editors of the Harvard Theological Review for their permission to use, in the third chapter, an article on "Mystery God and Olympian God," published in April 1916.