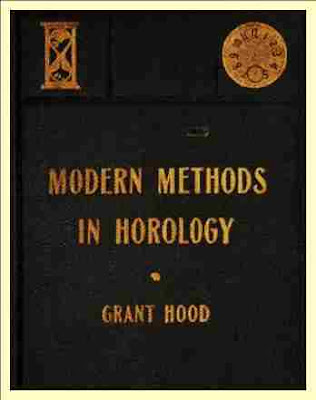 From the introduction:
Knowing the difficulties that present themselves to the average watchmaker as he begins serving his apprenticeship and knowing how limited the supply of knowledge he is able to find and understand has prompted me to write these pages, hoping the information may be such that it will encourage those that are discouraged, add renewed vigour to those who are ambitious and act as a warning to the ones that are inclined to be careless with their work.
My aim will be to make each subject as simple and clear as possible, adding illustrations in all cases where needed. If the book is successful in helping my brother workmen and will bring to them some new ideas that will be beneficial or will be the means of enabling them to do their work in an easier manner, the writer will feel that his labour has not been in vain and will be well pleased.
"What is time? The shadow on the dial, the striking of the clock, the running of the sand — day and night, summer and winter, months, years, centuries." The measurement of time has been accomplished by various means for many centuries, in fact, we are unable to trace its origin.
Doubtless, the first periods of division were those of day and night, caused by the revolution of the earth upon its axis, then upon closer observation, it was noticed that the shadows of rocks, trees, mountains and hills grew shorter and shorter as the sun rose higher and higher until it reached a certain point when the shadows began to grow longer and longer toward the close of day or the setting of the sun. From these observations the first timepiece of which we have any record was constructed, the sun-di"'
The first record we have of a sun-dial is about 725 B. C, found in II Kings XX chapter, 11th verse — "And Isaiah, the prophet, cried unto the Lord; and he brought the shadow ten degrees backward, by which it had gone down in the dial of Ahaz."
We read of some very large sun-dials constructed of massive stone masonry, among them the one at Benares. In olden times no other methods of telling time were known, even these on dark or cloudy days failed them.
The days have been divided into several different periods at various times, a decimal system was contemplated at one time, but the present system of twenty-four hours, each hour divided into sixty minutes and each minute into sixty seconds seems, perhaps on account of its familiarity to us, to be the very best possible one. After the sun-dials, the clepsydra was invented.
This was a very crude affair but had some points of merit the sun-dials did not have, viz., that of telling time when the sun did not shine and also in the evening after the sun had gone down, Several forms of clepsydrae or water clocks were constructed, some of them very ingenious, others very crude, even the best of them could not be depended upon as changes of temperature, different atmospheric pressures or the amount of water in them would greatly affect the flow. Some were vessels which contained water that escaped through small openings in the bottom, drop by drop, marks on the sides of the vessel indicating the hour, another form the water trickled drop by drop into another vessel which contained afloat, and this, as it slowly rose, would register the hour on a dial.
the book details :
Download 10.8 MB - Contains numerous illustrations