Hagakure - Book of the Samurai 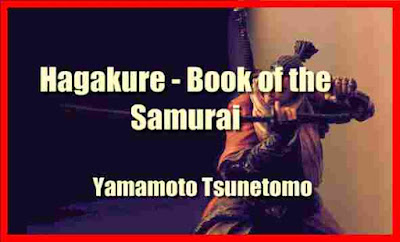 Hagakure is the essential book of the Samurai. Written by Yamamoto Tsunetomo, who was a Samurai in the early 1700s, it is a book that combines the teachings of both Zen and Confucianism. These philosophies are centred on loyalty, devotion, purity and selflessness, and Yamamoto places a strong emphasis on the notion of living in the present moment with a strong and clear mind. The Samurai were knights who defended and fought for their lords at a time when useful farming land was scarce and in need of protection.
They believed in duty and gave themselves completely to their masters. The Samurai believed that only after transcending all fear could they obtain peace of mind and yield the power to serve their masters faithfully and loyally even iv in the face of death. The word Hagakure literally translates as hidden beneath the leaves and also fallen leaves. Perhaps it was named this because, at the time that it was written, the way of the samurai was becoming obsolete.
The Hagakure has been rewritten in modern terms by one of Japan’s famous writers, Yukio Mishima. His own views were very similar to those of Yamamoto, particularly the philosophy of cultivating the self. His characters all had self-sufficiency in common and did not rely upon anyone else for completion. Although the Hagakure was written centuries ago for a breed of warriors that no longer exist, the philosophies and wisdom within are still practical, even in our modern times.