A companion to Greek studies 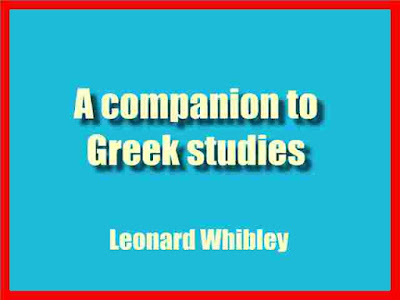 The Companion to Greek Studies was undertaken by the Syndics of the University Press with the intention of presenting in one volume such information (apart from that contained in Histories and Grammars) as would be most useful to the student of Greek literature.
It differs in scope from other books of the same class; for besides a survey of Greek life, thought, and art in their different branches, it includes a chapter on the physical conditions of Greece, another containing Chronological Tables of politics, literature, and art, and a chapter on certain branches of criticism and interpretation.
While each article has been entrusted to a writer who has made a special study of the subject, it has been the aim of the work to give the substance of our knowledge in a concise form. On this account, the discussion of controverted points and technical details has been for the most part omitted. For the same reason sources and authorities have not usually been cited in the text, unless the reference has been necessary to establish an argument, to justify an important theory, or to remind the student of the locus basics of the subject.
It is hoped that the full table of contents and the indexes of proper names and Greek words will increase the value of the book for purposes of reference. Bibliographies have generally been appended to each article to help those who seek further information. Plans, views, and reproductions of ancient works of art have been carefully chosen and inserted in those articles in which illustration seems most necessary. The principle which has been followed in the transliteration of Greek words coincide in the main with that adopted by the Society for the Promotion of Hellenic Studies. Names are presented in their familiar English or Latin form; but the diphthong et is usually retained {e.g. Peisistratus, Cleisthenes), except in words that are as well established in English as Chaeronea and Alexandria. Greek words other than proper names, unless they are familiar in other forms in English, have usually been transliterated letter for letter {e.g. Plethron, Nike, Pentekostys).
While the book has been passing through the press, members of the Syndicate and other scholars have contributed much help in suggestion, in criticism, and in reading the proofs.
Thanks are due to the following authors and publishers for granting the use of blocks or for permitting the reproduction of illustrations contained in works written or published by them; to Dr Arthur Evans, to Mr Cecil Torr for blocks from his book on Greek ships, to the Council of the Society for the Promotion of Hellenic Studies, to Messrs Longman and Co., to Messrs Macmillan and Co., to Mr John Murray, to the Titles, and to Carl Gerold's Sohn Verlag.
some subjects are now discussed for the first time, such as Ethnology, Bronzes and Jewellery. Others, Fauna, Flora, Prehistoric Art, Terracottas, Finance and Palaeography, are treated by fresh writers. Professor Bosanquet has revised the article on Sculpture, which was undertaken in the earlier editions by Sir Charles Waldstein: the sections dealing with Archaic, Hellenistic and Graeco-Roman Sculpture have been rewritten: minor changes have been made in the sections dealing with the sculpture of the fifth and fourth centuries B.C. Mr Adcock has contributed a sketch of the development of early constitutions and has revised Mr Wyse's article on Law. Mr Wace has discussed the Prehistoric House. Sir John Sandys has kindly undertaken the revision of the contributions of the late Sir Richard Jebb and Professor A. S. Wilkins and has made small additions or corrections in the articles on Literature, Education and Textual Criticism. Mr Gaselee has supplied a bibliography for the article on Metre.
There is scarcely an article that has not been revised. While it was not desired unduly to increase the size of the book