Getting on in the world

or, Hints on success in life 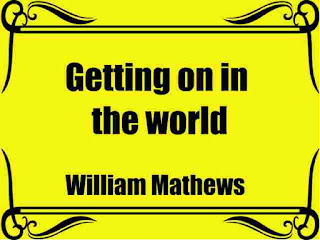 From introduction :
origin of this book, which will account for some of its peculiarities of style, is as follows. In the early part of 1871, the author wrote for the Chicago Tribune a series of articles on the subject here treated, after the publication of which a considerable number of persons in different parts of the Northwest expressed a wish that they should be gathered into a volume.
This led to their revision, and the addition of nearly twice as much new matter, the whole forming the work which is now offered to the public. That the book has many imperfections, the author is well aware; they are due partly to the fact that it has been written by economizing moments of leisure snatched from professional labours, and, to use a phrase of Milton, with his left hand.
Upon a subject which so many pens have discussed, it is, of course, hardly possible to say anything absolutely new; the most that a writer can hope to do is to recombine and present in the novel and attractive forms, with fresh illustrations, so as to impress persons who have not been impressed before, thoughts which have substantially been repeated from the days of Solomon to those of Smiles and " Titcomb."
Some of the topics, however, have been less hackneyed than others; as, for example, the important one of " Reserved Power," in writing the chapter upon which the author has been materially aided by some of the suggestions contained in " The Array. of the Reserve," an eloquent and scholarly address delivered at Bowdoin College, in 1862, by Hon. B. F. Thomas, LL.D.
If this book shall serve to rouse to honourable effort any young man who is wasting his time and energies through in- difference to life's prizes, to cheer, stimulate, and inspire with enthusiasm anyone who is desponding through distrust of his own abilities, or to reveal to anyone who is puzzled to discover the path to success and usefulness the art of " getting on" to the goal of his wishes, the author will feel himself abundantly repaid for his labours.
Doubtless, there are many persons who are better qualified by their worldly knowledge to discuss the subject here considered ; but, unhappily, the most successful men do not reveal the secret of their successes; and if we do not reject criticisms on paintings from men who have never handled a brush, nor refuse to follow the directions of a guide-post though it has never hopped off upon its one leg and travelled the road to which it points, a young man who is beginning life may accept the hints of a well-wisher whose knowledge of his needs has been derived from observation, rather than from experience.
the book details :
Download 15 MB