A compend of geology 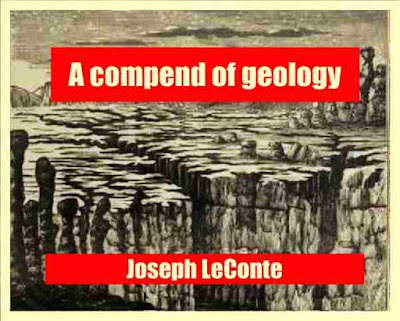 From the introduction:
Definition of Geology. — Geology is the science that treats the past conditions of the earth and of its inhabitants. It is, therefore, a history of the earth. It is closely allied to physical geography but differs in this: Physical geography treats only of the present forms of the earth's features; geology also, and mainly of their gradual formation, or evolution from former conditions. It is also closely allied to natural history but differs in this:
Natural history is concerned only with the present forms and distribution of animals and plants, while geology is chiefly concerned about previous forms and distribution, and their changes to the present forms and distribution. In a word, geography and natural history are concerned about how things are; geology, about how they became so. Cultivates Habit of Observation.
We have said geology treats the history of the past conditions of the earth and its inhabitants. The evidence of the past conditions is found in its present structure. But, to understand this structure, we must observe the manner in which a similar structure is formed now under our eyes. Thus, observation of causes operation constitutes the only solid foundation of geology.
Fortunately, the processes by which structure is now being formed may be observed everywhere; and the structures which have been 8thus formed in earlier times may be observed in very many places^ if we know how to look for them.
Thus geology, perhaps more than any other science, cultivates the habit of field-observation; not, indeed, that minute observation required by mineralogy or botany, but that wider observation which gives interest to mountain-travel or even to rambles over the hills in our vicinity.