Ethics and the materialist conception of history 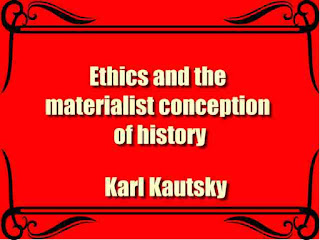 From introduction:
Like so many other Marxist publications the present one owes its origin to a special occasion, it arose out of a controversy. The polemic in which I was involved last Autumn with the editors of Vorwarts brought me to touch on the question of their " ethical tendencies." What I said, however, on this point was so often misunderstood by one side, and on the other brought me so many requests to give a more thorough and systematic exposition of my ideas on Ethics, that I felt constrained to attempt at least to give a short sketch of the development of Ethics on the basis of the materialist conception of history. I take as my starting point, consequently, that materialist philosophy which was founded on one side by Marx and Engels, on the other, though in the same spirit, by Joseph Dietzgen. For the results at which I have arrived, I alone am responsible.
My original intention only got so far as to write an article for the " Neue Zeit " on the subject. But never had I so miscalculated over the plan of work as this time, and not only in respect of its scope. I had begun the work in October because I thought there were now going to be a few months of quiet for the party, which might be devoted to theoretical work. The Jena Congress had run so harmoniously that I did not expect to see a conflict in our own party so soon.
On the other hand, it looked at the beginning of October as if there had come in the Russian revolution a pause for gathering together and organizing the revolutionary forces. As is well known, however, everything turned out quite differently. An unimportant personal question was the occasion of a sharp discussion, which indeed did not for a moment disturb the party, but all the same cost the party officials and especially those in Berlin, a considerable amount of time, worry and energy.
What, however, certainly demanded even more time and energy was the Russian revolution, which unexpectedly in the course of that very October received a powerful impetus and regained its previous height. That glorious movement naturally absorbed even out of Russia all the interest of revolutionary thinking people. It was a magnificent time, but it was not the most suitable moment to write a book on ethics. However, the subject had captivated me and I could not free myself, and so I concluded my work despite the many distractions and interruptions, which the Berlin storm in a teacup and the hurricane in the Russian ocean brought with them.
It is to be hoped that the little work does not bear too obviously on its face the marks of its stormy birth. When, however, I had brought it to a conclusion another question arose. Far beyond the limits of an article had it grown, and yet was hardly fit for a book. It contents itself with giving a general idea of my thought and gives very few references to facts and arguments to prove or illustrate what has been brought forward. I asked myself whether I ought not to reconstruct and enlarge my work by the addition of such arguments and facts.

I, ANCIENT AND CHRISTIAN ETHICS ...
II. THE ETHICAL SYSTEMS OF THE PERIOD OF THE ENLIGHTENMENT ...... 26
III. THE ETHICS OF KANT:
1 The Criticism of Knowledge ... 35
2 The Moral Law 46
3 Freedom and Necessity 59
4 The Philosophy of Reconciliation . . 65
iV. THE ETHICS OF DARWINISM :
1 The Struggle for Existence ... 70
2 Self-Movement and Intelligence . . 76
3 The Motives of Self-Maintenance and
Propagation 84
4 The Social Instinct 89
V. THE ETHICS OF MARXISM :
^ I The Roots of the Materialist Conception of History 105
2 The Organization of the Human Society :
a The Technical Development . . 119
b Technic and Method of Life. 123
c Animal and Social Organization 129
3 The Changes in the Strength of the
Social Instincts :
a Language 134
b War and Property 144
4 The Influence of the Social Instincts: Internationalism 155
b The Class Division 161
5 The Tenets of Morality:
a Custom and Convention . . . 174
b The System of Production and
Its Superstructure 184
c Old and New 190
d The Moral Ideal. , . . 194
the book details : Download 5.8 MB