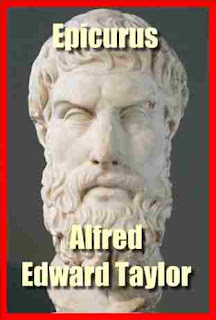 This little volume is, as its title proclaims, a brief study of the thought and temperament of a remarkable man, not the history of a scientific school. The band of comrades who gathered round Epicurus in his Garden were held together not so much by a common intellectual interest in the pursuit of truth as by the ties of personal affection among themselves and personal devotion to a master whom they regarded more as a Redeemer from the ills of life than as a mere thinker.
That the feelings of the Epicurean society of a later date were of the same kind is amply proved by the tone of the poem of Lucretius. Atomism as a scientific hypothesis owes nothing to Epicurus or to any of his followers; he found it already in existence, and every innovation which he made upon its existing form was, from the scientific point of view, a change for the worse. As a man of science, his place is with the circle-squarers and the earth-flatteners.
This, together with the fact that a volume on ancient Atomism is announced to appear in due time in the present series, will explain why I have said no more about the really scientific Atomism of the fifth century B.C. than was absolutely necessary to place the indifference of Epicurus and his followers to science in the proper light. For similar reasons have avoided dealing with Lucretius, the one man of genius in the Epicurean following, except where it has been necessary to cite him as a mere witness to the Epicurean tradition.
The one point of interest to the student of the history of physical theories which has, as I hope, been made clearer than is usual in works on ancient Atomism is that the Epicurean Physics are throughout the result of an unhappy attempt, which no clear-headed thinker would ever have undertaken, to fuse together the radically incompatible doctrines of Democritus and Aristotle.
If the establishment of this important point has made my second chapter into something like the exposure of a charlatan, the fault is not mine. For a different reason, I have said little as to the few facts definitely known about the illustrious obscurities of the Epicurean succession.
I trust some compensation may be found in the chapter on the anti-Epicurean polemic carried on by the Platonic Academy. The volume has been throughout written from the original sources with little use of any modern works on Epicurus, except, of course, Usener's invaluable collection of his extant writings and fragments, and Koerte's compilation of the fragments of Metrodorus.
I trust that my treatment in this way may have gained in freshness something of what it has, no doubt, lost in erudition.
the book details : Download 7.7 MB