English prose from Bacon to Hardy 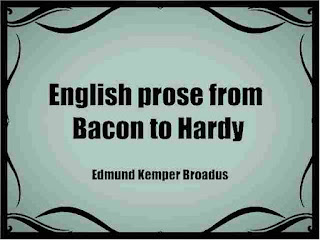 The selections in this book have been chosen with two purposes— firstly, to give ample representation to each author included, and, secondly, to limit the number of authors so that the book may not be too bulky to serve as a textbook in courses on the history of English literature. Owing to the inclusion of minor writers, many volumes of selections present the student with too large and complex a mass of material. Other books, confining themselves to one type of prose such as the essay, are too narrow in their scope for use in courses on literary history.
The plan adopted here has necessitated the omission of many authors. For example. Burton, De Quincey, Landor, Newman, Pater, and others have not been given because, by reason of style or subject, they can hardly be considered representative figures. Other writers, such as Fuller, Sir William Temple, and Leigh Hunt, have been omitted because their main characteristics are sufficiently represented in one of their greater contemporaries.
The novelists have been represented by adequate selections from those writers only who are most important in the tradition and development of the novel. Boswell's Life of Johnson has been passed over because the book, effective by its mass, can hardly have justice done it by an extract. An additional reason was that its omission made it possible to give more space to Johnson himself, whose prose has been too often neglected. Since it was the intention to deal only with modern English prose, no writers earlier than Bacon have been included. But while earlier English prose has not been represented, selections have been given from writers of our own day, such as Meredith and Hardy.
The choice of passages has often been guided by what is characteristic of an author or period rather than by what is intrinsically best. In the case of Dickens, for instance, the chapter on the death of Little Nell has been included because it represents an important site of the novelist's work better than some passages less open to criticism. In most cases, fortunately, it has been possible to reconcile the two principles of selection. An attempt has been made, in a way not usually done in books of selections, to present the various aspects of an author's work.
Thus Bacon is represented not only by some of his essays but also by passages from The Advancement of Learning and The Life of Henry VII. Other examples which illustrate the same purpose are Swift, Johnson, Scott, Coleridge, and Stevenson. One feature of the book which may be mentioned is the selection from the essayists and letter-writers of the eighteenth century.
The main purpose, in this case, is to throw some light on the social background of literature at the time and to represent fairly liberally two types of literature peculiarly characteristic of the period. No similar selections from the nineteenth century have been given because the compact literary society of the previous age had disappeared and the more complex conditions which replaced it could not be illustrated in the same simple way. There is also the reason that many of the greatest nineteenth-century letter-writers are known chiefly as poets.
With the object of helping students to grasp the distinguishing mark of a writer's work, we have placed at the head of each group of selections a passage in which the author speaks of his own work, his aims, his methods, or his training. Such a volume as this cannot restrict itself to works short enough to be given in full. Accordingly, we have supplied summaries of omitted passages in such essays as the Aeropagitica, and in the case of novels, a short synopsis has been given which may serve to bring out the significance of the extract. It is hoped that this plan may partly overcome the incompleteness and disjointed character of a book of selections.
No attempt has been made to supply full annotation,. Notes have been added where the required information might not readily be found in ordinary books of reference, or where the bearing of such information on the text might not be at once perceived. It remains to thank Mr Thomas Hardy and Messrs. Macmillan for permission to use the extracts from his work; Messrs. Constable for the chapter from George Meredith; Messrs. Chatto & Windus and Messrs. Charles Scribner's Sons for the selections from K. L. Stevenson; and the Oxford University Press for unfailing courtesy during the preparation of the volume. Their constant help has overcome many of the difficulties caused by our remoteness from large libraries.
the book details : Download 31 MB