A modern dictionary of the English language 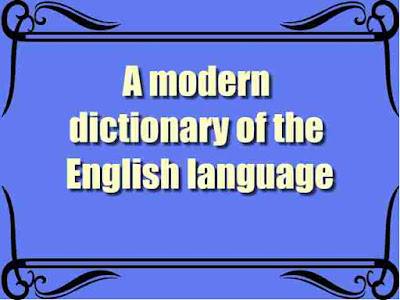 An English Dictionary, especially suitable for the use of pupils in Secondary Schools and the upper classes of Elementary Schools, has long been a desideratum. Such a book should be
(1) helpful in the reading of ordinary current literature ;
(2) a guide to the peculiarities of spelling and pronunciation ;
(3) free from all objectionable words and meanings; and
(4) printed in very bold, clear type. The " Modern Dictionary " has been specially prepared to meet these requirements.
One of the chief aims of the editor has been to produce a work which shall be thoroughly practical and quite up-to-date, and a reliable companion (as complete as possible within its limits) to current newspapers, magazines, books, and conversation. Great care has, therefore, been bestowed on the selection of modern words and phrases (including foreign ones of frequent occurrence), and on the definitions given; it is believed that no small English Dictionary at present on the market contains so many of the newer words and phrases that form part of the current literature of to-day. Many simple words and obsolete meanings, or meanings that very rarely occur, are omitted.
Where abstract nouns, adjectives, and adverbs are derived directly from the root word and present no peculiarity either of spelling, pronunciation, or meaning, such words also are frequently omitted. Words are often arranged in groups, as they thus help to explain each other; but where a derived word would (from its form) be difficult to find in a group, it has been inserted in its proper alphabetical order, often with a cross-reference. Prefixes, abbreviations, and foreign words and phrases are arranged in the body of the Dictionary in their proper alphabetical order.
The pronunciation (either of a whole word or of a particular part of it) is given in all necessary cases. Allowable alternatives, both of spelling and pronunciation are given, the first one, in each case, being the one for which there is most authority. Many popular errors, both of spelling and pronunciation, are pointed out, and little notes often call special attention to these, as well as to some common errors in grammar.
The chief authorities consulted for spelling have been the Rules of the Oxford Press, and Collins' Authors and Printer Dictionary, which books codify the best typographical practices of the present day, and Murray's New English Dictionary; this last has also been the chief guide for pronunciation. Etymology is a difficult subject, and there are many cases in which 'doctors disagree,' but an endeavour has been made to show ( the end of each definition) the word from which our word directly out showing all the stages through which it has passed.
the book details : Download 56.5 MB