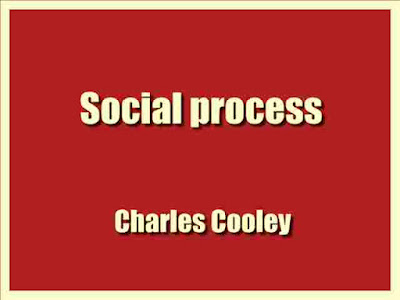 Excerpt:
we see around us in the world of men an onward movement of life. There seems to be a vital impulse, of unknown origin, that tends to work ahead in innumerable directions and manners, each continuous with something of the same sort in the past. The whole thing appears to be a kind of growth, and we might add that it is an adaptive growth, meaning by this that the forms of life we see men, associations of men, traditions, institutions, conventions, theories, ideals are not separate or independent, but that the growth of each takes place in contact and interaction with that of others.
Thus anyone phase of the movement may be regarded as a series of adaptations to other phases. That the growth of persons is adaptive is apparent to everyone. Each of us has energy and character, but not for an hour do these develop except by communication and adjustment with the persons and conditions about us. And the case is not different with a social group, or with the ideas which live in the common medium of communicative thought. Human life is thus all one growing whole, unified by ceaseless currents of interaction, but at the same time differentiated into those diverse forms of energy which we see like men, factions, tendencies, doctrines, and institutions.
The most evident distinction among these growing forms is that between the personal and the impersonal. A man is a personal form of life; a fashion or a myth is impersonal. This seems obvious enough, but there are cases in which the line is not so plain, and it may be well to consider more precisely what we mean by "personal" in this connection, or rather in just what sense a form of human life can be impersonal.
An impersonal form, I should say, is one whose life history is not identified with that of particular persons. A myth, for example, has a history of its own which you would never discover in the biography of individuals, and although it exists in the minds of men it cannot be seen intelligibly except by regarding it as a distinct whole for which human thought is only a medium.
When an American Indian, let us say, repeated with unconscious variations the story of Hiawatha, he did not know he was participating in the growth of a myth; that was taking place in and through him but quite apart from his personal consciousness. The same is true of the growth of language. We know that the speech of any people has a vital unity, offering to the philologist a world of interesting structures and relations of which those who use the language and contribute to its growth are as unaware as they are of the physiology of their bodies.
The difference between personal and impersonal organisms, then, is above all practical, resting upon the fact that many forms of life are not identified with personality and cannot be understood, can hardly be seen at all, by one who will interest himself only in persons.
They exist in the human mind, but to perceive them you must study this from an impersonal standpoint. Observe the practical value, if we hope to do away with war, of perceiving that the chief opponent of peace is something far more than anyone groups of men, like the Prussian aristocracy, namely militarism, an international organism existing everywhere in the form of aggressive ideals, traditions, and anticipations. If we can learn to see this, and see how we ourselves, perhaps, are contributing to it by our ignorance of foreign nations and our lack of generous ideals for our own, we are in a position to oppose it effectually.