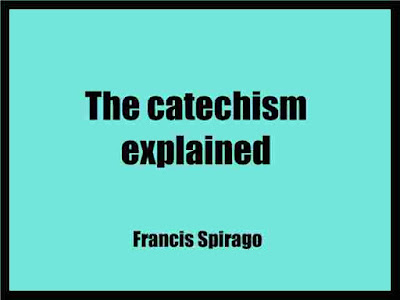 an exhaustive exposition of the Christian religion, with special reference to the present state of society and the spirit of the age

From preface:
Spirit the understanding is enlightened and the will strengthened. Thus a close connection exists between the different parts of this Catechism. Each part is subdivided and arranged to form a whole, so that the connection between and the coherence of all the truths of religion are plainly apparent. This is a very impor tant point.
For the more clearly we perceive the manner in which the truths of religion are linked together, the easier will it be for us to apprehend each one singly. The Catechism is a marvellously connected system of revealed truth. If Catholics were thoroughly acquainted in their childhood with the fundamental truths o£y religion ; if they were taught to see how all the different parts of this divine edifice combine to form one beauteous structure, the darts of hell would have no power to injure them..
The large print in this Catechism is the scaffolding, or skel eton ; it contains all the essential truths of religion. The small print might, as a matter of fact, be omitted; but in that case there would be nothing calculated to touch the heart and kindle the flame of charity towards God and one's neighbor, and is not this the effect which every good hand-book of religion, every good ser mon, every good catechetical instruction ought to produce ?
We already possess in abundance catechisms and religious manuals which appeal only to the intellect ; books which do not aim at the warmth of expression and the fervent, persuasive eloquence which appeal to the heart, the force and vivifying power which affect the will through the influence of the Holy Spirit..
This Catechism aims at cultivating, to an equal extent, all the three powers of the soul : the understanding, the affections, and the will. It does not therefore content itself with mere defini tions. The principal object proposed in it is not to teach men to philosophize about religion, but to make them good Christians who will delight in their faith. Consequently questions of scholastic theology, doctrines debated among divines, are either omitted altogether or merely receive a passing mention.
The author has endeavored to divest religious teaching of the appear ance of learning, and to present it in a popular and simple form. Technical terms, in which almost all religious manuals abound, even those intended for children, are carefully eliminated from his pages since, while useful and necessary for seminarians and theo logians, they are out of place in a book intended for the laity. Popular manuals of religion ought to be couched in plain and simple language, like that used by Our Lord and the apostles, easy of comprehension ; for what we need is something that will touch the heart and influence the will, not cram the mind with knowl edge unattractive to the reader.
The present book is, moreover, not an adaptation of catechisms already in use, but an original work, intended for practical purposes. Attention may also be called to the fact that the teaching of the Church is not presented in a dry, abstract form, but is rendered attractive and interesting by illustrations, comparisons, and quotations from well-known writers. Thus there is no danger that it will be thrown aside as unreadable.
The extracts from the writings of the Fathers are not always given verbatim, the idea alone being in many cases bor rowed, as a literal rendering of the language employed, beautiful and forcible as it is, might prove rather misleading than edifying to the young and unlearned. The same may be said of some passages taken from Holy Scripture. What is of paramount importance in a book of this nature is to make use of expressions that are clear and intelligible.
The writings of the Fathers are quoted mainly to elucidate and illustrate, not to prove the truths that are enun ciated.
In preparing this Catechism for publication, the author has kept in view his purpose of assisting the teacher. To this end he has made it his endeavor to arrange his matter according to a clear and methodical system ; to place his ideas in logical sequence, and to clothe them in simple language composed of short sentences.
All the several branches of religious teaching — the Catechism, Bible history, the liturgy, controversy, ecclesiastical history — have been comprehended in one course of instruction, which has un questionably the effect of enhancing the interest and appealing to the understanding as well as to the heart and the will.
The old- fashioned form of embodying the instruction to be given in ques tion and answer has not been followed. That form is not sufficient, and needs further elaboration. Faith comes by hearing, not by questioning only.
A knowledge of all the truths of our holy religion is not so universal that they can be thoroughly learned by question and answer : they must be regularly taught by oral instruction. This form of teaching calls for the exer cise of more thought ; question and answer, moreover, do noth ing towards simplifying the truths to be imparted, or rendering them more intelligible to the learner.
the book details : Download 44.3 MB