The cycle industry, its origin, history and latest developments (1921) 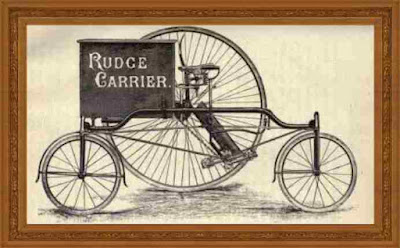 The manufacture of bicycles can be truly described as one of the most important industries of the country. The bicycle is also a common commodity, and it is for these two reasons that this book was undertaken. An attempt has been made in the following pages to give a brief outline of the history of the manufacture of bicycles in this and other countries from the introduction of the velocipede to the present day mechanically propelled machine, the motorcycle.
The author has endeavoured to describe some of the more important processes of manufacture and to embody with those descriptions particulars of the numerous other trades on which the cycle manufacturer is dependent. In conclusion, the writer would like to thank those who have so kindly provided him with illustrations of the machines they make. His thanks are also due to Messrs. Bell & Sons for their kind permission to reproduce illustrations of by-gone models from the late Mr H. Hewitt Griffin's book, Cycling.
At the same time, he wishes to make the fullest acknowledgements to all who have in any way assisted him with information in any form.
In this introductory chapter, it is not proposed to deal with the forerunners of the bicycle, such as the hobby horse and some of the more weird wooden machines with four wheels and lever motion, which were known to be in existence before the introduction into this country of the bicycle propelled by cranks attached to the axle of the front wheel, called a velocipede. We will therefore begin with the velocipede, a type of machine which first attracted the attention of a Mr Turner, who saw it being ridden and exploited at a Paris school of gymnastics.
At this period in the history of bicycles, about 1868, the city of Coventry had established, by the enterprise of a few Coventry gentlemen, a factory for the production of sewing machines. The firm was known as the Coventry Sewing Machine Company (afterwards The Coventry Machinists Co.), and was founded to find employment for people in the city who had been thrown out of work by the fierce competition of the foreign ribbons and watches which were admitted into the country, either free of duty or on conditions which left very little profit for Coventry ribbon and watchmakers.
Mr Turner, who was an agent for the firm, had been asked to look out for something in the mechanical line, suitable for manufacture at the sewing machine factory, and having been much impressed by the novelty and possibilities of the new velocipede, immediately secured a sample of the machine and brought or sent it to Coventry.
The directors and managers of the concern there, after a trial of the boneshaker sent over from Paris, decided to begin manufacturing and marketing the machine, and a dozen or so were put in hand at their workshops and proved a success. This bicycle was made with a cast-iron frame, the felloes and spokes of the wheels were of hickory, with steel tyres, and the saddle was a wooden one covered with leather, thinly padded, and supported on a long flat spring of steel; the bearings were plain journals, i.e. in place of steel ball bearings the axles of the wheels were of steel and they turned in chilled cast iron holes in the ends of the forks.
The pedals were called " treadles " and were mostly of wood. A machine of this description, ready for the road, was sold in London for about 12, without accessories such as a lamp, pocket oil can, shifting spanner, leather toolbag and brake cord, which cost about 25s. more.