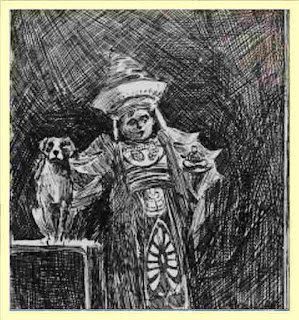 From introduction:
As doubting Thomases seem to take particular pleasure in popping up on all occasions, Jack-in-the-B ox-like, it may be well to head them off in this particular instance by proving that Baron Trump was a real baron and not a mere baron Of the mind.
The family was originally French Huguenot — De la Trompe — which, upon the revocation of the Edict of Nantes in 1685, took refuge in Holland, where its head assumed the name of Van der Troomp, just as many other of the French Protestants rendered their names into Dutch. Some years later, upon the invitation of the Elector of Brandenburg, Niklas Van der Troomp became a subject of that prince, and purchased a large estate in the province of Pomerania, again changing his name, this time to Von Troomp.
The “ Little Baron,” so-called from his diminutive stature, was born some time in the latter part of the seventeenth century. He was the last of his race in the direct line, although cousins of his are today well-known Pomeranian gentry.
He began his travels at an incredibly early age, and filled his castle with such strange objects picked up here and there in the faraway corners of the world, that the simple-minded peasantry came to look upon him as half bigwig and half magician — hence the growth of the many myths and fanciful stories concerning this indefatigable globe-trotter.
The date of his death cannot be tixed with any certainty; but this much may be said: Among the portraits of Pomeranian notables hanging in the Rathhaus at Stettin, there is one picture a man of low stature, and with a head much too large for his body. He is dressed in some out- outlandish costume and holds in his left hand a grotesque image in ivory, most elaborately carved. The broad face is full of intelligence, and the large grey eyes are lighted up with a good-natured but quizzical look that invariably attracts attention.
The man’s right-hand rests upon the back of a dog sitting on a table and looking straight out with an air of dignity that shows that he knew he was sitting for his portrait. If a visitor asks the guide who this man is, he always gets for answer: — “ Oh, that’s the Little Baron I ” But little Baron who, that’s the question? Why may it not be the famous Wilhelm Heinrich Sebastian von Troomp, commonly called “ Little Baron Trump,” and his wonderful dog Bulger?
the book details : Download 17 MB