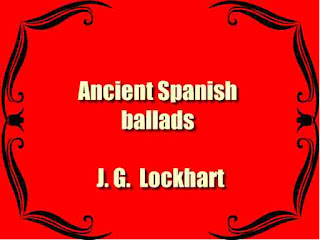 The intention of this Publication is to furnish the English reader with some notion of that old Spanish minstrelsy, which has been preserved in the different Cancloneros and Romanceros of the sixteenth century. That great mass of popular poetry has never yet received in its own country the attention to which it is entitled. While hundreds of volumes have been written about authors who were, at the best, ingenious imitators of classical or Italian models, not one, of the least critical merit, has been bestowed upon those older and simpler poets who were contented with the native inspirations of Castilian pride. No Spanish Percy, or Ellis, or Ritson, has arisen to perform what no one but a Spaniard can entertain the smallest hope of achieving. Mr Bouterweck, in his excellent History of Spanish Literature, complained that no attempt had ever been made even to arrange the old Spanish ballads in anything like chronological order.
An ingenious countryman of his own, Mr Depping, has since, in some measure, supplied this defect: He has arranged the historical ballads ac- cording to the chronology of the persons and events which they celebrate for even this obvious matter had not been attended to by the original Spanish collectors but he has modestly and judiciously refrain- ed from attempting the chronological arrangement of them as composition feeling, of course, that no person can ever acquire such a delicate knowledge of a language not his own, as might enable him to distinguish, with accuracy, between the different shades of antiquity or even perhaps to draw, with certainty and precision, the broader line between that which is of genuine antiquity, and that which is mere modern imitation.
By far the greater part of the following translations are from pieces which the reader may find in Mr Depping"s Collection, published at Leipzig, therefore, in the present state of things, quite impossible to determine to what period the composition of the oldest Spanish ballads now extant ought to be referred. The first Cancionero, that of Ferdinand de Castillo, was published so early as 1510. In it a considerable number both of the historical and of the romantic class of ballads are included,
The Cancionero de Romances, published at Antwerp in 1555, and afterwards often reprinted under the name of Romancero, was the earliest collection that admitted nothing but ballads. The Romaiicero Historiado of Lucas Rodriguez appeared at Alcala in 1579; the Collection of Lorenzo de Sepulveda, at Antwerp, in 1566. The ballads of the Cid were first published in a collected form in 1615, by Escobar.
But there are not wanting circumstances which would seem to establish, for many of the Spanish ballads, a claim to antiquity much lighter than is to be inferred from any of these dates. In the oldest edition of the Cancionero General, for example, several pieces bear the name of Don Juan Manuel. If they were composed by the celebrated author of Count Lucanor, (and it appears very unlikely that any person of less distinguished rank should have assumed that style without some addition or distinction,) we must carry them back at least as far as the year 1362, when the Prince Don Juan Manuel died. But this is not all.
The ballads bearing the name of that illustrious author, are so far from appearing to be among the most ancient in the Cancionero that even a very slight ex- amination must be sufficient to establish exactly the reverse. The regularity and completeness of their rhymes alone are in fact quite enough to satisfy anyone who is acquainted with the usual style of the redondillas, that the ballads of Don Juan Manuel are among the most modern in the whole collection.*
the book details : Download 3 MB