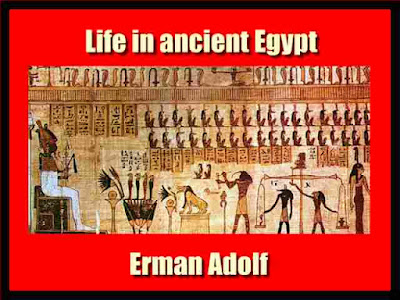 Excerpt:
The need for a popular work on the manners and customs of Ancient Egypt has long been felt by the English public. Herr Erman supplied this need in Germany by the publication of his Aegypten, but no English scholar has attempted to fill this gap in Egyptian literature since the time of Wilkinson.
In the light of modern discoveries
Wilkinson's valuable book, as far as the letterpress is concerned, has now long become obsolete; the illustrations on the other hand will always remain a mine of wealth to every writer on this subject. In the present work, for instance, the low price of the German edition forbade the introduction of many original drawings, and Herr Erman, who chose the illustrations especially to amplify and explain the text, found that the three works most useful to him for this purpose were the Manners and Customs, by Wilkinson, the Denkmaler, by Lepsius, and L'Histoire de Art, by Perrot-Chipiez.
With regard to the text, finding little to help him in the work of previous scholars, Herr Erman for several years devoted all the time he could spare from his official duties to original research on the subject. The two works he mentions as having been of special service to him are Lepsius' Denkmaler and The London Select Papyri; in fact, he would almost regard the present work as a commentary on those great publications.
A list of quotations from these works is given at the end of this edition. The author has confined himself to the treatment of those periods of ancient Egyptian history which have been styled the "Old Empire," the " Middle Empire," and the " New Empire "
It is so complicated for a work of this size, and too much mixed with foreign elements to be termed purely Egyptian. The orthography of the Egyptian names was decided upon by the author after much thought and consideration; it has therefore been retained in the English edition, with the exception of the name " Thothmes," which, on account of its familiarity to English readers, has been substituted (with Herr Erman's approval) for its more correct form.
In the same way, the forms Osiris, Isis, and Horus were retained by the author in the German edition.
In the present English edition, there have been but few alterations; a few notes have been added referring to English Egyptological works, or to the more recent research of foreign scholars,as in the case of the translation

Herr Erman wishes to inform his English readers that he is fully aware that many alterations might be introduced into his work to bring it into accord with the results of later research, but he feels that these alterations would only affect details and not the general scope of the book.
Students of any special branch of Egyptology must consult other textbooks dealing with their particular subject in more full and exact detail. For instance, those who desire to study the plans of the houses, the arts and crafts of these ancient workmen, the tools they used, the methods of workmanship they employed, will find far more exact and technical information in the publications of Prof. Petrie, which have appeared since this book was written — details which it would be impossible to incorporate in this work without greatly enlarging its extent.
The valuable work of the Mission Archeologique Francaise, as well as the excavations of the Egypt Exploration Fund, carried on under the direction of M. Naville, have also added largely to our knowledge in many particulars. Thus, the great altar with its outside staircase, discovered last year in the great temple of Queen Chnemtamun (Hatasu) at Der el Bahri, corresponds
In many respects, the great altar of the " House of the Sun," is depicted on the walls of the tomb of the high priest Meryr6' at Tell el Amarna, described in the twelfth chapter of this work. Neither altar can claim to be unique.
The important papers on the Rhind Mathematical Papyrus by F. L. Griffith in the April and May numbers of the Proceedings of the Bib. Archaeology throws further light on the subject of Egyptian mathematics, treated at the close of the fourteenth chapter, pp. 364-368; and the paper on Hat Nub by G. W. Fraser in the January number of the Proceedings of the same society ought certainly to be read in connection with the account of the transport of stone at the close of the eighteenth chapter.
The latter paper refers not only to the transport of alabaster across the desert from the great quarries of Hat Nub but also to the important scene found last season by M. Naville at Der el Bahri, depicting the transport by boat of the great obelisks of Queen Chnemtamun.
My thanks are especially due to Prof. Stuart Poole, who has most kindly read through the sheets in proof, and to Herr Erman for his help and courtesy in facilitating the appearance of the "child of his brain in a new dress." The German work has already received a warm welcome; my hope is that the Aegypten, in its new form of Life in Ancient Egypt, may give pleasure and help to many who, in their busy life, prefer to read books in their mother tongue.
The Greeks, who from the seventh century B.C. were frequent visitors to the Nile Valley, marvelled to find there a civilisation which, though more ancient, was at least the equal of their own. They saw to their astonishment powerful populous towns, strange gigantic temples, and a people who in no wise resembled the inhabitants of Ionia and the Greek islands.
These people were honoured as gods oxen and crocodiles, which were served by bald linen-clad priests; and not only in their worship did they differ from other nations, but also in their daily life they seemed to do everything in a way contrary to that usual in other countries.
" Concerning Egypt," says the wise Herodotos, " I shall extend my remarks to a great length, because there is no country that possesses so many wonders, nor any that has such a number of works which defy description.
Not only is the climate different from that of the rest of the world, and the rivers unlike any other rivers, but the people also, in most of their manners and customs, exactly reverse the common practice of mankind. ( The women attend the markets and trade, while the men sit at home at the loom;\and here, while the rest of the world works the woof up the warp, the Egyptians work it down; the women likewise carry burthens upon their shoulders, while the men carry them upon their heads.
A woman cannot serve the priestly office either for god or goddess, but men are priests to both; sons need not support their parents unless they choose, but daughters must, whether they choose or not.\ In other countries the priests have long hair, in Egypt, their heads are shaven; elsewhere it is customary, in mourning, for near relatives to cut their hair close; the Egyptians, who wear no hair at any other time, when they lose a relative let their beards and the hair of their heads grow long.
However one-sided and exaggerated this description may be, it shows us how strange and incomprehensible the Egyptians appeared even to the educated among the Greeks, who really tried to understand this ancient person. The Greek populace regarded them with the same timid wonder that our people feel for the pig-tailed Chinese or Japanese.
the book details :
Download 25.3 MB-  The book contains illustrations