The Philosophy of Anaxagoras 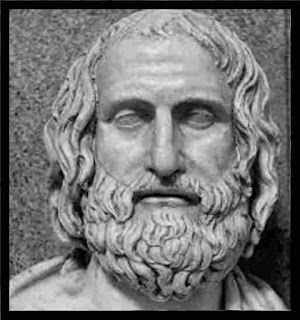 It is a true calamity that we have so little left of those earlier philosophic masters and that we have been deprived of anything complete. Because of that loss we unintentionally measure them in wrong proportions and allow ourselves to be influenced against them by the mere accident that Plato and Aristotle have never been in want of praisers and copyists. . . . Probably the grandest part of greek thought and of its expression in words has been lost to us.
Friedrich Nietzsche, who wrote these sentences in 1873, is quite right (save that he takes for an accident what certainly was not one). Plato, our great Plato, is really but an imposing synthesis, the admirable architect of a grand building, practically none of the stones of which come from himself. And Aristotle, the polyhistor, as far as his philosophy is concerned, is apparently little else but a Plato deprived of his poetical make-up, notwithstanding those ostensible differences which Aristotle himself is given to emphasizing.
The truly great ones, the giants, the really original thinkers, the pure philosopher types, these are to be found in the time before Plato. Again: Nietzsche is right. But his plaint is not quite justified. Those grand constructions are not hopelessly lost. We have been "Deprived of anything complete/ but there have been left to us large numbers of fragments. It is doubtless true that works complete in a literary sense cannot be joined together from these remains. On the basis of the extant fragments, at any rate,
In principle, a philosophic reconstruction is not impossible. It is im- possible only to the old-fashioned nothing-but-philologist, just as it would be impossible to the mere philologist to reconstruct a whole from fragments of an ancient mathematician's work. Cognition of the like by the like it is here, if anywhere, that that old rule applies. Command of the Greek language, though indispensable for this task, is not enough for grasping, let alone for judging, Greek philosophy. In those olden times, all people in Greece spoke Greek, after all.
What is to be accomplished by philosophic reconstruction is not to fit together, like pieces of a jig-saw puzzle, stray fragments into a literary whole; but to construct a philosophic building in such a way that all the authentic material handed down can be fitted in. For some thirty years I have been attempting to reconstruct the genuine system, in all its foundations, branches, and ramifications, of one of the most gigantic of those pre-Platonic giants: the system of Anaxagoras.
Time is not reversible. Therefore, if we want to arrive at an understanding of what the genuine Anaxagoras thought and taught, we may, in fact, must presuppose all that he could have learned from his philosophic ancestors and brothers. But on the other hand, while attempting to reconstruct his philosophy, all of our knowledge and even of our notions that have arisen from later periods of human thought must be silenced and forgotten.
A difficult task, indeed, but as thrilling as an actor's! To impersonate Orestes in a tuxedo would hardly be proper, would it? And so, too, in the historic theatre of mental evolution, true style is pertinent.
However, it is not as wearers of their costumes that the heroes of Greek tragedy have become eternal human models, but only in so far as they are embodiments of eternal types of human character, engaged in eternal human conflicts. Likewise, beyond its mental costume, so interesting historically, the philosophy of Anaxagoras in its very essence, its primary and prime conception has come to be an eternal question's eternal answer.
"Anaxagoras was one of the most famous of early Greek philosophers. ... Anaxagoras believed this principle was what he called nous or "mind." His theory was that nous set unarranged matter in the universe into motion and created order from it."
the book details :
Download The Philosophy of Anaxagoras 5.8 MB