An introduction to American literature 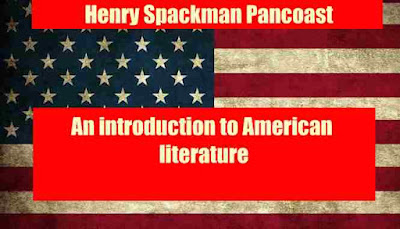 From the introduction:
The term American Literature, although firmly established by custom, and sufficiently well understood, is, If we were not acquainted with literature the meaning which usage has given to the words, we should naturally understand them to include all the literature produced in America, whether before or after its discovery by Europeans. But, rightly or wrongly, the term American literature has received by ordinary use and acceptance a far more restricted meaning.
It does not embrace the entire literature of the American continent, as European literature includes that of all Europe; but only that of a definite part of North America the part now the United States. We dwellers in these United States, holding, as we do, the first place in the Western world, think and speak of ourselves as the Americans, distinguishing Canadians, Brazilians, or Mexicans, inhabitants as they are of our common continent by the name of that particular country to which they respectively belong. In the same way, by American literature we mean our literature; just as by the American flag we mean our stars and stripes, or by an American citizen, a citizen of the United States.
On the other hand, we must remember that American literature does not mean merely the literature of the United States, for it is far older than our national life. It means simply the American branch of English literature set by colonization in fresh earth; it means the continuation of English literature within the limits of what has become the United States, by people English in their speech, English to a considerable extent by inheritance, and English in the original character of their civilization.
Of course, this literature is now and has been for more than a century, the product of a politically independent nation, to the making of whose people almost every race and country has now contributed. It is true that our intellectual dependence on England, at first almost unlimited, has gradually lessened, and that for more than a century our Republic has been moving slowly towards self-confidence and independence in literary methods and in thought.
Doubtless, as our civilization becomes more compact and mature, as our national ideals grow clearer, our character more firmly set and defined, this divergence between American and English literature will increase, and our coming writers will embody with growing force and distinctness the national life and spirit that will stir around them. But while we may expect to be more and more truly American in the future, we must remember that we were emphatically English in the past; that our literature in its origin was not the voice of a united and independent nation, but the disconnected and stammering utterance of a straggling line of English colonies, fighting for a foothold along the coast of inhospitable land.
For about one half of its entire history, extending in all over less than three centuries, what we call American literature was in fact nothing more than one of the colonial literature of England. Originally the provincial oil shoot of the greatest literature of the modern world, American literature has grown up under the shadow of the English, slowly modified by new physical, social, and political conditions.
As truly as the American flag represents our political separation from England, so truly does our American literature, in its birth and growth, exhibit our intellectual dependence on the mother-land; a dependence which has been weakened by the development of our national spirit, but which even yet, to a considerable extent, remains. It is clear that, by reason of its origin, American literature stands in a different position from that occupied by many of the great literature American of the world.
The United States is a and other young people; we are an old people, for our ancestors brought with them a mature civilization when they landed on this new soil to possess and subdue it. One of the most truly national of our poets has spoken of America as that The literature of Greece reflects the normal progress of a people from the primitive life of a young nation to a state of high civilization and maturity.
But unlike Greece or even England, America has never passed through all these natural stages of a people s growth, and our literature cannot be expected to express them. In certain great departments of literature, in certain materials for the creation of literature, America must of necessity be comparatively or wholly wanting.
At no time could we have produced the rude chant, or primitive epic, because when our English forefathers first settled here they had passed far beyond the stage of national development which makes such creations possible.
The cultivated Greek was born into a world where beautiful myths and legends were a living part of the very landscape: our writers, living in a land comparatively free from all the hallowed and inspiring associations of the past, can reach the earlier and fresher stages of a race s mental life only by forcing an entrance into an aboriginal world in which we, as a people, have no share. If we would think ourselves back into that dim and legendary land of wonder and beauty which great nations inhabit in their childhood, we must turn, as Longfellow does in Hiawatha, to the stories of an alien race, or we must cross the sea and enter the national nursery of the Greek, or Celt, or English.
We must therefore think of our literature, not only as a provincial continuation of the English but as beginning at a comparatively late period in the life of that race of which we are a branch.