After this, I will return or, The threefold outlook 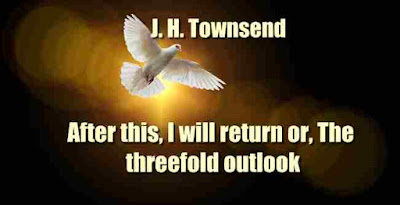 The Bible records three critical periods in religious history. The First after the Babylonian Captivity, when Church and State were trying to adapt themselves to altered conditions in Jerusalem, and men looked forward fearfully to the future.
The Second when the Messiah had been rejected by His people, and the little handful of men who heard their Master speak of coming woes " trembled for the Ark of God." The Third was when the Infant Church met together for the first time as a corporate body to face a difficulty that threatened its very existence. On each of these occasions, there was a seer, One speaking by His own knowledge, the other two by the knowledge imparted to them, who looking on into the future and describing the regulated plan on which God intended to work, calmed the fears of His people.
Zechariah, the prophet of the First and Second Advents, had a priceless opportunity, and not only influenced the men of his generation so well as to reform the nation but also was inspired to give more particulars than any other prophet of ultimate deliverance from the terrible trials of his race in the days that seem now to be approaching.
The Lord Jesus, the Great Central Figure of history, Who saw Past Present and Future at a glance, left to His faithful ones a clue to His actions which would be able to lead them along the perplexing maze of the days to come, and whose value has never seemed so great as at this very moment. Last of all, our Lord's Brother, Chairman of the great assembly that met in Jerusalem, was inspired by the Holy Spirit to calm the excited feelings of the early Church by showing that nothing took God by surprise, but that from the first He had laid down a plan of operations which was to be found in the Bible.
These three utterances, outlooks into the future at very different times, whose lines of thought seem now to be converging to a point perhaps not very far away, are more and more important as the days pass by; may they quicken in us that earnest prayerfulness, fervent diligence, and eager alertness that should characterize those who watch for that 11 One, far off, Divine Event To which the whole Creation moves." In the following pages I propose first to examine the words of the Master Himself; secondly, the message of His prophet, and last of all, the inspired utterance ex-cathedra of His Apostle. The Last Day of Our Lord's Ministry
Most students of Scripture have noticed that the Gospels give us a diary more or less complete of the opening and closing weeks of our Lord's Ministry. St. John supplies the former, the latter is obtained from the three earlier writers. I do not think, however, that many have observed the particular order in which our Saviour arranged the Eight Parables of his last Discourses, and the questions addressed to Him by foes and friends. I use the word "arranged" advisedly, for as it is no accident in nature that causes crystals to take perfect mathematical shapes, so it seems to be impossible to believe that the remarkable form in which these words have crystallized should have been anything less than a carefully matured design.
the book details :
Download 2.8 MB