Roumania Past and present 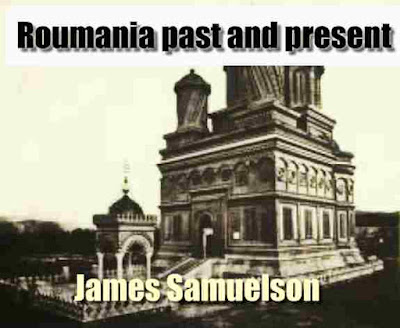 There is no country in Europe which at the present time possesses greater interest for Englishmen than does the Kingdom of Roumania, and there is none with whose present state and past history, nay, with whose very geographical position, they are less familiar. Only about nine years since Consul-General Green, the British representative there, reported to his Government as follows: ' Ignorance seems to extend even to the geographical position of Bucharest.
It is not surprising that letters directed to the Roumanian capital should sometimes travel to India in search of Bokhara, but there can be no excuse for the issue of a writ of summons by one of the superior law courts of the British metropolis, directed to Bucharest in the Kingdom of Egypt, as I have known to happen.'
The reader may per- haps attribute such mistakes as these to our insular ignorance of geography, or to the fact that the proverbial blindness of justice prevented her from consulting the map before issuing her process; but the fact remains, that notwithstanding the occurrence of a great war subsequent to the date above specified, which completely changed the map of Europe, wherein Rouinania took a very prominent part and England assisted at the settlement, there are few intelligent readers in this country who could say off-hand where precisely Roumania is situated.
And yet, as already remarked, the country possesses an absorbing interest for us as a nation. Placed, to a large extent through English instrumentality, as an independent kingdom, of daily increasing influence, between Russia and Turkey, for whom she served for centuries as a bone of contention, she is now a formidable barrier against the aggressions of the stronger power upon her weaker neighbour, and it is satisfactory to reflect that, so far, the blood and money of England have not flowed in vain.
Then, again, the question of the free navigation of the great stream that serves as her southern boundary is at present occupying the serious consideration of many leading European statesmen, and the solution of the Danubian difficulty will materially affect our trade with the whole of Eastern Europe; whilst the peaceable creation of a peasant proprietary in Roumania about sixteen years since, and the advantages which have accrued to her from this social and political reform, present features of peculiar interest for those who favour the establishment of a similar class of landholders in Ireland.
In treating these two questions, I have laboured under the great disadvantage of not being able to follow current events. It is understood that the Danubian difficulty will be settled on the plan, referred to in the text, suggested by Austria for her own advantage, with certain modifications, having for their object the limitation of her preponderance.
My readers will be able to judge for themselves, after reading the brief review of the question, and the references to our own commercial relations with the countries bordering on the Danube in the third and fifth chapters, whether such a settlement is likely to be final. For myself, I cannot believe that any solution will be permanently satisfactory which interferes with the jurisdiction of Roumariia in her own waters. As to the land question, it calls up some awkward reflections when its history is contrasted with recent and passing events in Ireland. So long as the conquerors in Roumania endeavoured to solve the problem, their efforts were unavailing.
At the Convention of Balta-Liman between Russia and Turkey, where * coercion ' was coupled with ' remedial measures,' an ineffectual attempt was made to ameliorate the wretched condition of the peasantry on the old lines of feudalism; but it was not until the country became autonomous and the legitimate representatives of the people took the matter in hand, that an efficient remedy was applied. Then, as the reader will find detailed in the following pages, 1 more than four hundred thousand heads of families amongst the peasantry came into peaceful possession of a large pr-portion of the land on equitable terms; and whilst the industrious agriculturist is now daily acquiring a more considerable interest in the soil, the landlords, who were merely drawing revenue from the labour expended upon it by others, are gradually disappearing. That the prosperity and stability of the country have increased through the change is shown in many ways, but more especially by the enhanced value of Roumanian Government securities, of which I have been able to append a short statement in contrast with those of Russia and Turkey.
Contents:
PART I.
ROUMANIA, TODAY.
I. GEOGRAPHICAL AND DESCRIPTIVE 3
II. GEOGRAPHICAL ARCHAEOLOGICAL 20
III. THE NAVIGATION OF THE DANUBE 30
IV. TOPOGRAPHICAL, ETC 36
V. TOPOGRAPHICAL COMMERCIAL G7
VI. AGRICULTURAL AND PASTORAL THE PEASANT PROPRIETARY 74
VII. EDUCATIONAL ETHNOGRAPHICAL 88
VIII. JUDICIAL AND PENAL. . . . 100
PART II.
HISTORICAL.
IX. FROM THE GET.*; (ABOUT 335 B.C.) TO THE CLOSE op THE ROMAN
DOMINATION IN DACIA TRAJANA (ABOUT A.D. 274) . .115
X. FROM THE EVACUATION OP DACIA BT AURELIAN (ABOUT 274
A.D ) TO THE END OF THE BARBARIAN RULE (ABOUT THE
CLOSE OF THE THIRTEENTH CENTURY) 138
XI. FROST THE FOUNDATION OF THE PRINCIPALITIES, BETWEEN
THE MIDDLE OF THE THIRTEENTH AND OF THE FOURTEENTH
CENTURIES, TO THE ACCESSION OF MICHAEL THE BRAVE,
A.D..1593. . 161
XII. THE TIMES AND CAREER OP MICHAEL THE BRAVE . . . 170
XIII. FROM TffE DEATH OF MICHAEL THE BRAVE (A.D. 1G01) TO
THE DEPOSITION OP PRINCE COTJZA (A.D. 1866) . . . 199
XIV. FROM THE DEPOSITION OF PRINCE COUZA (1866) TO THE
CORONATION OF KING CHARLES (1881) 233
XV. PRESENT ROUMANIAN LEADERS AND THEIR POLICY. 258
I. MOVEMENTS AND SETTLEMENTS OF NATIONALITIES AND
BARBARIAN TRIBES 272-3
II. THE 'CAPITULATIONS' 274
III. THE ROUMANIAN CONSTITUTION 275
IV. THE PEASANT PROPRIETARY OF ROUMANIA. .;...... 277
V. LIST OF WORKS (WITH REFERENCES TO TEXT) . . . . 278
CLASSIFIED INDEX. 281
Download 16.4 MB