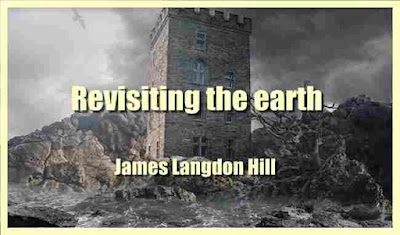 To revisit the earth after one's departure from it has always been a common wish among men. The frequency with which this desire is expressed in biographies and in literature keeps the project alive and works it to the front in one's plans. Benjamin Franklin presents the thought in such an attractive dress that we are inclined to adopt it for a programme.
There is one item in his proposition that calls for argument at the bar of public opinion. It touches the length of the interval that should be suffered to elapse before the visit is made. So rapid is the growth, so radical are the changes, that if one's reappearance is too long delayed he would recognize nothing in the new conditions. He might as well set himself down in some other unfamiliar place.
The postponement should not exceed a third of a centurj\ It is his world that a man wants to see, and each one has his own. His 1112 Revisiting the Earth antecedents and experiences have given to it a distinctive character. To Open Books that are Sealed
On a golden day, the thought came to me unbidden, I have seen three and thirty years rise and fall since I have viewed the identical spots that I would care most to look upon. Instantly I made the resolve, I will visit, in the first eight weeks of summer, every place in which I have lived or lived or laboured. I ascertained, in advance, the name of some kindly disposed of person, at each point in my itinerary, who could identify the site of the house in which I lived, if it is not still standing, also of the school and church that I attended.
The letter I had written was handed in one case to the editor of the local paper, who featured it, in his columns, asking for the names of persons now living who remembered me. Here is plainly seen an insuperable objection to waiting Ben Franklin's interval of one hundred years before revisiting the earth.
This correspondence, which contributed immeasurably to the pleasure and profit of the project, ought to be undertaken, while there are two parties to conduct it. Where one's coming is expected and welcomed he passes at once into the right relations to the place, also into the atmosphere he desires. Revisiting the Earth 13 Let Me Drop a Hint Here Like a Seed I care not how widely you have travelled if you have never made a pious pilgrimage to your child- hood's shrines — you have still missed your superlative pleasure. It is possible for you to live your life over and the part commended for you to live over again is when you were young.
Here is rejuvenation. To live one's life over is to live it twice. This amounts to doubling it. Who would not do it? If the period of time during which one may live on the earth is fixed, it certainly is limited, if there is a possible way to live twice, what one does live, he would better be extremely hospitable to the scheme.
The opposition will come from three sources, first from the man who thinks himself was taken up by the future and by his hopes. But it is patience that works "experience and experience hope." Hope detached from the present and the past is such a baseless fabric of a vision that it probably will not leave even so much as a wreck behind.
Another man will counter with the familiar statement that his eyes are on the front of his head and he only travels in the direction that they lead. Now my kind, optimistic brother, I have a word here for you.
You are travelling in blinders. You are a mechanical pace-setter. All jour training is for the middle of the road. It is counted as a physical deformity if a person cannot turn his head. It is an expression of opprobrium to find people stiff-necked. The chief office of a vehicle is to carry on, yet for use at home, a carriage that cannot be turned around would be extremely inconvenient.
Pausing for a Fore-taste The observation car giving the best view to be had of the mountain landscape as it waltzes by, is placed at the rear of the train. The most extravagant demonstrations of jo} r and gratitude, our most hallowed feelings come from looking back on what has been done unto us and for us. Hesitancy about revisiting the earth comes lastly from those who think they have lost their interest in days that are gone, that forgetfulness has done its sad work, that the dead past has buried its dead. It is to witness the miracle of a resurrection that we are uttering our cry.