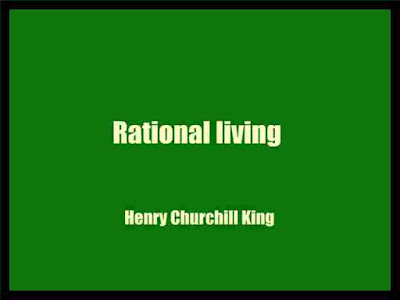 some practical inferences from modern psychology

It is with considerable hesitancy that one undertakes to point out the practical suggestions of modern psychological investigations. Scientific workers in this field have a natural prejudice against attempts to make their science quickly useful; and this feeling is so strong on the part of many, that one almost seems to proclaim himself to such as a charlatan at once if he attempts to draw practical inferences from this study, and to make these inferences generally available. But is it not possible that we might well heed just here Hilty's illuminating word? "
Truth, wherever it may be sought, is, as a rule, so simple that it often does not look learned enough." It is true that the full significance of the inferences will hardly be felt apart from a reasonable presentation of their psychological grounds, and it is also true that many attempts so practically to use psychological results have been fanciful and extravagant and have tended to lay extreme emphasis upon the least assured results of recent investigations.
Still, it was extraordinary if such extended and thorough study of human nature as the recent years have shown had no valuable suggestions for living, that all men would do well to heed; and James and Sully and Baldwin and Royce — to mention no others — have certainly left us no room for doubt upon that point. And it ought not to be impossible to present the psychological facts, even in somewhat popular form, with sufficient accuracy and fullness to give weight and point to the practical suggestions in evolved, provided these practical inferences are drawn with sanity and moderation and from assured results. And it is only with such inferences that this book intends to deal. It makes no appeal to the mere love of novelty or mystery.
It intends to build soberly upon the whole broad range of psychological investigation. If I may be allowed frankly to express in these introductory words my personal feeling and conviction, I should say that I have not been able to doubt the seriousness and value of the counsels lying back of this modern psychological study.
Even where the counsel is not new, it comes with fresh force, when its psychological justification can be clearly shown. Manifold as, no doubt, the shortcomings of this book are, it is still no hasty compilation, but embodies those suggestions which, through a number of years, have appealed both to myself and to many others as of interest and importance.
I have found myself using so often, in practical counsel and in ethical and theological inquiry, the psychological principles here appealed to, that it has seemed reasonable to hope that the book might have some real service to render to others.
For it is but too obvious, on the one hand, that many students complete their courses in psychology with but a small sense of its direct bearing on life, and so fail to grasp its real significance, through the very lack of application of its principles; and, on the other hand, that men generally need, and are able intelligently to receive, much of the best that psychology has to give, but that it is difficult to find in any fullness except in more or less technical treatises.
There seemed, therefore, to be a place and a need for the attempt here made. While, then, the book does not aim to be a technical treatise upon psychology, nor profess to embody the results of original psychological investigation, it does distinctly aim to make generally available the most valuable suggestions for living that can be drawn from the results of the best workers in this field. I have, consequently, quoted freely and sometimes at length, both to give the reader immediate access to the original authority for the psychological facts, and to give him the opportunity to judge the justness of the inference drawn in any given case. For I, of course, do not mean to hold those from whom I quote responsible for all my inferences, though I have meant that these should be reached with scrupulous care.
The very plan of the book makes my indebtedness to others very large — an indebtedness which I have intended to recognize in each case by specific reference. At the same time, it is hoped that the book does not lack the original suggestiveness and the unity that should give added significance to the individual suggestions.

INTRODUCTION
No Confusion, but Greater Richness
CHAPTER I
The Psychological Grounds for the Recognition of the Complexity of Life „ 7
I. The Evidence of the Different Departments of Psychology 7
1. Physiological Psychology, . 7
2. Race Psychology 7
3. Pathological Psychology. , 7
4. Comparative Psychology, 8
5. Experimental Method in, . . » . 8
II. The Need of a Wide Range of Interests .....„<, 9
III, The Relatedness of All 14
1. Recognition of Relatedness of All . 14
2. Human Nature Avenges Itself for Disregard of the
Range of Its Interests 15
3. The Denial of the Possible Separation of the Sacred
and the Secular 17
4. Absorption in the Lower Defeats Itself, 20
CHAPTER II
Recognition of the Paradoxes of Life — Opposing Relations 22
I. The All-Inclusive Paradox of Ends and Means .... 22
II. The Paradoxes of the Different Spheres of Life .... 23
1. Paradoxes in the Physical Life 23
2. Paradoxes in the Intellectual Life 24
3. Paradoxes in the Mora! Life 26
4. Paradoxes in the Religious Life 31
5. Choosing One's Lifework and Abiding Character The "Hierarchy of Mes" 31
6. The Fundamental Paradox of Life. Docility and Initiative 32
CHAPTER III
The Emphasis of Psychology on Conditions 39
I. The Lessons of Natural Science 40.
II. The Significance of Common Work and Duties .... 42
III. No Magical Inheritance 44
IV. No Conditions in General 45
THE UNITY OF MAN
CHAPTER IV
The Unity of Mind and Body — Introduction 47
I. Ascetic Treatment of Bodily Conditions 47
II. Not a Materialistic Position ^ ....., 49
the book details : Download 7.4 MB