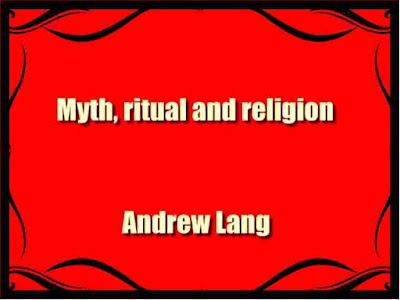 The original edition of Myth, Ritual and Religion, published in 1887, has long been out of print. In revising the book I have brought it into line w^ith the ideas expressed in the second part of my Making of Religion (1898) and have excised certain passages which, as the book first appeared, were inconsistent with its main thesis. In some cases the original passages are retained in notes, to show the nature of the development of the author's opinions.
A fragment or two of controversy has been deleted, and chapters xi. and xii., on the religion of the lowest races, have been entirely rewritten, on the strength of more recent or earlier information lately acquired.
The gist of the book as it stands now and as it originally stood is contained in the following lines from the preface of 1887: " While the attempt is made to show that the wilder features of myth survive from, or were borrowed from, or were imitated from the ideas of people in the savage condition of thought, the existence even among savages of comparatively pure, if inarticulate, religious beliefs is insisted on throughout ". To that opinion, I adhere, and 1 trust that it is now expressed with more consistency than in the first edition.
I have seen reason, more and more, to doubt the validity of the " ghost theory," or animistic hypothesis, as explanatory of the whole fabric of religion; and I present arguments against Mr Tylor's contention that the higher conceptions of savage faith are borrowed from missionaries.^ It is very possible, however, that Mr Tylor has arguments more powerful than those contained in his paper of 1892. For our information is not yet adequate to a scientific theory of the Origin of Religion, and probably never will be. Behind the races whom we must regard as " nearest the be- ginning" are their unknown ancestors from a dateless past, men as human as ourselves, but men concerning whose psychical, mental and moral condition we can only form conjectures.
Among them, religion arose, in circumstances of which we are necessarily ignorant. Thus I only venture on a surmise as to the germ of faith in a Maker (if I am not to say "Creator") and Judge of men. But, as to whether the higher religious belief or the lower mythical stories came first, we are at least certain that the Christian conception of God, given pure, was presently entangled, by the popular fancy of Europe, in new Mdchen about the Deity, the Madonna, her Son, and the Apostles.
Here, beyond the possibility of denial, pure belief came first fanciful legend was attached after. I am inclined to surmise that this has always been the case, and, in the pages on the legend of Zeus, I show the processes of degeneration, of mythical accretions on faith in a Heaven-God, in action.
That "the feeling of rehgious devotion'- attests "high faculties" in early man (such as are often denied to men who "cannot count up to seven"), and that " the same high mental faculties . . . would infallibly lead him, as long as his reasoning powers remained poorly developed, to various strange superstitions and customs," was the belief of Mr Darwin.
That is also my view, and I note that the lowest savages are not yet guilty of the very worst practices, " sacrifice of human beings to a blood-loving God," and ordeals by poison and fire, to which Mr Darwin alludes. "
The improvement of our science" has freed us from misdeeds which are unknown to the Andamanese or the Australians. Thus there was, as regards these points in morals, degeneracy from savagery as society advanced,
In vol. ii. p. 19 occurs a reference, in a note, to Mr Hartland's criticism of my ideas about Australian gods as outlined in the Making of Religion. Mr Hartland, who kindly read the chapters on Austrahan religion in this book, does not consider that my note on p. 19 meets the point of his argument.
As to the Australians, I mean no more than that, among endless low myths, some of them possess a belief in a " maker of everything," a primal being, still in existence, watching conduct, punishing breaches of his laws, and, in some cases, rewarding the good in a future Hfe. O
f course, these are the germs of a sympathetic religion, even if the being thus regarded is mixed up with immoral or humorous contradictory myths. My position is not harmed by such myths, which occur in all old religions, and, in the middle ages, new myths were attached to the sacred figures of Christianity in poetry and popular tales. Thus, if there is nothing " sacred " in religion because wild or wicked fables about the gods also occur, there is nothing "sacred" in almost any religion on earth.

CHAPTER I. SYSTEMS OF MYTHOLOGY I
Origin of attempts to explain myths — (i.) Among the old heathen races a practical and moral need of apology for mythical acts of gods — (2.) Modem historical curiosity — Ancient apologetics, poetic, priestly, philosophic — The two elements in myth, rational and irrational — Examples: Method of Homer, omission and selection — Method of Pindar — Ancient physical, etymological, political, historical, mystic, and symbolical explanations of Greek myths — The assaults of the Christian Fathers on myths — Plutarch, Porphyry, and their refutation by Eusebius — Short sketch of later theories of myth — Bryant, Creuzer, Otfried Miiller, Lobeck — The philologists, Kuhn, Schwartz, Max Miiller — Objections of Mannhardt — Limitations of philology.
CHAPTER II
NEW SYSTEM PROPOSED ... . . 26
Chapter I. recapitulated — Proposal of a new method: Science of the comparative or historical study of man — Anticipated in part by Eusebius, Fontenelle, De Brosses, Spencer (of, Cambridge), and Mannhardt — Science of Tylor — Object of inquiry: to find the condition of human intellect in which marvels of myth are parts of practical everyday belief — This is the savage state — Savages described — The wild element of myth a survival from the savage state — Advantages of this method — Partly accounts for wide diffusion as well as the origin of myths — Connected with the general theory of evolution — Puzzling example of the myth of the water-swallower — Professor Tiele's criticism of the method — Objections to the method, and answer to these — See Appendix B.
.
CHAPTER III.
THE MENTAL CONDITION OF SAVAGES — CONFUSION "WITH
NATURE— TOTEMISM .46
The mental condition of savages is the basis of the irrational element in myth— Characteristics of that condition : (i.) Confusion of all things in equality of presumed animation and intelligence — (2.) Belief in sorcery— (3.) Spiritualism— (4. ) Curiosity— {5.) Easy credulity and mental indolence — The curiosity is satisfied, thanks to the credulity, by myths in answer to all inquiries — Evidence for this— Mr Tylor's opinion— Mr Im Thurn— Jesuit mission- aries' Relations — Examples of confusion between men, plants, beasts, and other natural objects — Reports of travellers — Evidence from the institution of totemism — Definition of totemism — Totemism in Australia, Africa, America, the Oceanic Islands, India, North Asia — Conclusion: Totemism being found so widely distributed, is a proof of the existence of that savage mental condition in which no line is drawn between men and the other things in the world — This confusion is one of the characteristics of myth in all races.
CHAPTER IV. THE MENTAL CONDITION OF SAVAGES — MAGIC — METAMORPHOSIS — METAPHTSIC — PSYCHOLOGY . . .82
Claims of sorcerers — Savage scientific speculation — Theory of Causation — Credulity, except as to new religious ideas — ''^ Post hoc, ergo propterhoc^' — Fundamental ideas of magic — Examples: incantations, ghosts, spirits — Evidence of rank and other institutions in proof of confusions of mind exhibited in magical beliefs.
CHAPTER V. NATURE-MYTHS 122
Savage fancy, curiosity, and credulity illustrated in nature-myths — In these all phenomena are explained by the belief in the general animation of everything, combined with belief in metamorphosis — Sun-myths, Asian, Australian, African, Melanesian, Indian, Californian, Brazilian, Maori, Samoan — Moon-myths, Australian, Muysca, Mexican, Zulu, Macassar, Greenland, Piute, Malay — Thunder-myths — Greek and Aryan sun and moon myths — Star- myths — Myths, savage and civilised, of animals, accounting for their marks and habits — Examples of the custom of claiming blood kinship with lower animals — Myths of various plants and trees — Myths of stones, and of metamorphosis into stones, Greek, Australian, and American — The whole natural philosophy of savages expressed in myths, and survives in folklore and classical poetry, and legends of metamorphosis. -^
the book details : Download  Volume 1  - 8.5 MB
Download Volume 2 -    9.6 MB