A month in Rome 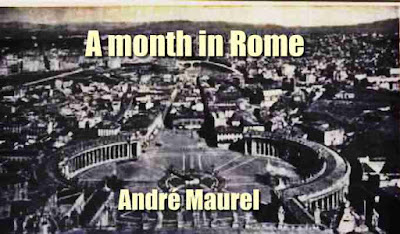 The book contains illustrations and maps
From the author preface:
A month in Rome! Thirty days in a city that could not be exhausted by thirty years of profound study! Thirty days of the light impressions of a traveller who is amusing himself — as are all travellers.
Rome is a world in which one must live for years before he can know his way about in it. How I envy the good fortune of those travellers who merely pass through it!" Goethe never intended to have his "envy" taken seriously, but I confess that it is just one of those passing-through-travellers that I wish to be.
This is not the book of a man on his tenth visit, but of one who has passed little time in Rome. Neither archaeologist nor critic, willing to accept all hypotheses, even the most contradictory, I am ready to beg the erudite scholars not to drive the wolf away from the Palatine.
I have come here for the pleasure of wandering innocently among the ruins, listening to their faint voices on every side. Not a stone that bruises my heel fails to sound its note, and the chorus swells into a great hymn that stirs my heart. Among the best-known of the recent conquerors of ancient Rome, M. Rene" Schneider has said of her soul and M. Emile Bertaux has said of her treasures all that can be said at present, but it is some time since we have had the fresh, — naive, if you will, — impressions of the tourist of average culture and uninterest, the well-intentioned traveller who sees what he sees and thinks and feels without premeditation, a book that the hurried visitor may thumb as he walks about, in the hope of finding therein expressed some of his own rapid sensations. Little now exists of the Rome described by President de Brosses and Stendhal, whose literary and familiar style I imitate without hoping to equal it.
The discoveries made and the changes wrought in a hundred and fifty and in eighty years have so modified the aspect of the Eternal City that the impressions of the twentieth-century visitors must be quite different from theirs. In the course of the last thirty years, a new Rome has been born, and that is as true of the ancient as of the modern city. In the Forum, for instance, Taine and Gaston Boissier, whose works must always be incomparable monuments of judgment and taste, would not know where they were.
I should be proud to walk behind those writers who knew so well how to question and to count the stones they found here, but I pretend to do no more than simply to say what the new state of the place may inspire in the neophyte of today, that which impresses a student in Rome made young by a thousand ruins, thanks to the zeal of that clever artist, that learned archaeologist. They fixed for all the world whatever was known in their time and whoever treads the pavements of Rome walks in their footsteps.
They and their followers permit me to be happy at ease before these marbles and in these ancient, newly re-made gardens. I hope for nothing but to share my pleasure with those who would like to accept me, not as their guide, but as a companion. We shall go out to walk thirty times, we shall choose thirty interesting subjects from among the hundreds offered us in the inexhaustible supply which would fill thirty more days and yet other thirties.
If some- times, our days seem short, you must remember that I am compelled to condense my descriptions and to sum up what we see in second, third, and even fourth visits, taken for granted, since every tourist in Rome goes back to places he has seen, and, on the way, he steps into buildings not down on his programme for that day.
One might see Rome in fifteen mornings and fifteen afternoons if to see a city were but to open one's eyes upon it, but with thirty days we shall be able to see even this ancient mistress of the world with some understanding and to hear her voice in our ears forever after. Her voice is ringing in my ears as I write, for the truth is one writes first of all for himself, not daring to strive to please others lest he miss his mark, but content simply to follow the counsel of Ernest Renan: "Lift your soul, feel noble, and say what you feel."
This book, then, is merely what a friend once said of my Little Cities of Italy — the work of a happy man. May others share my happiness once more!
the book details : Download  A month in Rome  17 MB