A clinical manual of mental diseases 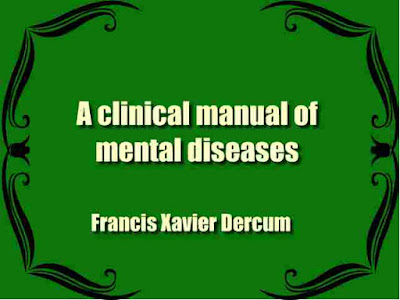 The generous reception accorded the first edition of this manual justifies the inference that a purely clinical presentation of mental disease fulfils a distinct want. The practising physician has too often looked upon insanity as a subject un-attractive and obscure, difficult and abstruse, and with which, because of the speculative and metaphysical character of its theories and explanations, he has no immediate concern.
The truth is, however, that when viewed from the standpoint of internal medicine it is brought into close and intimate relations with the latter. This becomes especially evident when we realize that many cases of mental disease have their origin in infections and intoxications, while others present problems that are essentially those of disorders of metabolism.
Many of the latter have to do with profound nutritional disturbances which have their origin in defensive reactions of the organism to intoxications. Such intoxications may arise from without or, it may be, from within the organism. Among the latter are toxic states due to abnormalities of the various glands of internal secretion or of other structures.
In other cases of mental disease, again, the physician has to do with aberrancies and arrests of development, with peculiarities of structure and mental organization often hereditary; and in each of these, there are, again, the added and largely unsolved problems of toxic metabolism. Finally, in given instances, the mental symptoms are in relation to the gross visceral or bodily disease.
In short, the more we study insanity, the more we become convinced of the importance of bringing the subject into the closest possible relations with internal medicine. This edition, like the first, is based upon the annual course of lectures delivered by the author at the Jefferson Medical College and has been prepared from a purely practical point of view. In the classification, general arrangement, and descriptions the author has endeavoured to present the subject in a simple and yet thorough manner, and, at the same time, to keep the volume within the limits of a convenient manual.
It is the general practitioner, the family physician, who sees the patient first, and he should be sufficiently informed to be able to recognize mental diseases in their early stages. He should know what to do under given conditions; how the patient should be treated in his own home or elsewhere outside of an institution should this be practicable; and when to commit and when not to commit a patient to an asylum.
In the present edition, the various sections have been expanded so as to include, as in the instances of dementia prsecox and of paresis, the more recent views in regard to pathology and treatment; in the case of dementia prsecox the important and interesting results of Fauser and others on the genesis and pathology of the affection have been incorporated; in the case of paresis, the advance in pathology and the moot question of treatment have received full consideration.
The chapter on the psychological interpretation of the symptoms has been enlarged and in part rewritten, as have also various sections on treatment. The volume, as a whole, has been thoroughly revised, and, as in the first edition, emphasis has been laid upon the purely clinical and practical features.