Goodness Had Nothing to Do With It 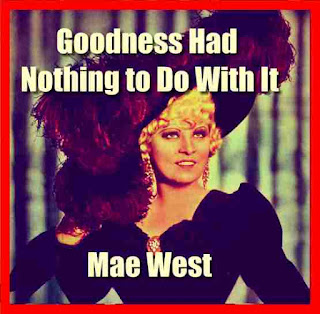 Autobiography of Mae West - actress, playwright, screenwriter.
Excerpt:
The Brooklyn I was born in, near the end of the 19th century, was still a city of churches, with their great bronze bells wallop- ing calls to the faithful from early dawn, and a city of waterfront dives where the old forest of the spars of sailing ships was rapidly being replaced by funnels and the Sand Street Navy Yard already had a reputation for girl chasers. Gentlemen, and deer, ran wild in Prospect Park. I was born into a world of much more sunlight and less smoke than now, a world of ringing horse cars, ragtime music, cakewalks and Floradora Sextets, and a sense that the coming new century would be the biggest and the best.
The final score is not yet in, but I think this one will make it among the centuries to treasure. Brooklyn was a city of neat horse-plagued, tree-lined streets, connected by a brand new bridge to Manhattan. Men of affairs, business and otherwise, still drove a pair of horses in a fancy rig, and while manly beards were still in fashion, the well-dressed man-about-town was already waxing the ends of his English Guardsman's moustaches and learning to point them with a twist of his ruby-cuff-linked wrist. There were Brooklyn picnics in the many groves of oak and elm that still existed, and the great iron-wheeled beer drays pulled by four to six large-rumped horses in their polished harnesses were a sight to cheer. There was a fine theatre audience — high and low. Girls in tights, and girls without them, and the rag-time beat and the first stirrings of jazz from faraway Storyville were already coming out of the places soon to use Mr Edison's new electric-light signs.
The sports were beginning to appear in the first of the horseless carriages. The lobster palaces, high button shoes, popular hook-and-ladder fire companies were the things that gave a man standing in his community. I was a child of the new century just around the corner, and I ran towards it boldly. I was born on a respectable street in Brooklyn on the 17th of August, 1893.
I am of English, Irish and German extraction, which means the usual European intermixture of many unknown genes that keeps people lively. My father, John West, was of English and Irish descent, a tough chip-on-the-shoulder lover of fun and fights. His father was also a John West who came from a long line of John Wests originally from Long Grendon, Buckinghamshire, England.
The first John West in America came over in the 1700s. My father's mother, Mary Jane Copley, was Irish and came to this country at an early age. She was related to the well-known Copleys of Boston and Pittsburgh. Unlike his brothers, who went through college, my father, a wild, laughing man, preferred a life of banging physical action. When he married my mother he was known as "Battling Jack West, Champion of Brooklyn, New York." My father was an epic figure in Brooklyn. I remember all the stories about him: the gay time when he was courting my mother, / Take the Spotlight 3 and had taken her to a social club outing. He had resented the attentions a club member paid her. A fight started and my father, all knobby with muscles, knocked the rival out with one punch.
The club members, a hundred angry men, ganged upon him. Father, in a savage rage, knocked two glass beer mugs together and with the jagged remains cut and slashed his way through the fray, leaving a bloody mob.
the book details : Download 35.4 MB