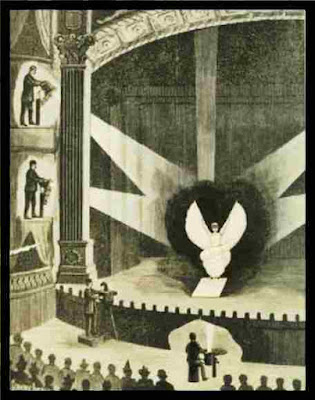 It is believed that the present Avork occupies a unique field in the extensive literature of magic. There are already a large number of treatises on natural magic and legerdemain, but in most of them, very little attention has been given to the exposing of stage illusions, which are of great interest as they are so largely based on ingenious applications of scientific principles. Optics, mechanics, sound, and electricity have all been pressed into service by the fiti de Steele prestidigitator.
In the present work, great attention has been paid to elaborate tricks of this nature, and in many cases the exposes have been obtained from the prestidigitators themselves. In the first few chapters, many of the best illusions of Robert-Houdin, Dr Lynn,
Professor Pepper, Bautier de Kolta, Heller, Herrmann, Maskelyne and Cooke, and Kellar will be found clearly explained. Conjuring tricks have been by no means neglected, but the number of them which are given has been limited, owing to the fact that many of tlie books on magic have gone into this subject quite extensively. Ventriloquism, shadowgraphy, mental magic, etc., will also be found treated in the present work.
The chapters relating to ''Ancient Magic" take up the temple tricks of the ancient Egyptian, Greek, and Roman thaumaturgists, as well as a number of automata which are very interesting in view of their very early epoch. It is believed this will be found a particularly entertaining feature of the book. There is always a great charm about the stage and the methods of producing the effects which give realism to the drama.
The chapters devoted to " Theatrical Science " will be found to contain a very large number of effects and illusions, many. of which are here presented for the first time. Thus an entire opera, "Siegfried," is taken up, and the methods by which the wonderful effects are obtained are fully illustrated and described. Such amusements as cycloramas, the nautical arena, and fireworks with dramatic accessories are not neglected.
The chapters on " Automata " and " Curious Toys " describe many interesting tricks and mechanisms of an amusing nature. The last few chapters of the book deal with " Photographic Diversions," and here will be found some of the most curious and interesting tricks and deceptions that may be performed by the aid of photography. The practical side of scientific photography will also be found represented. The chapter
on " Chronophotography " describes the photography of moving objects of all kinds, and shows how the results obtained are of value to the savant.
The projection of moving pictures upon a screen is thoroughly treated, a number of different forms of the apparatus is described. The introduction is a unique feature of the work, being written by Mr Henry Eidgely Evans, of Washington, D. C, author of "Hours with the Ghosts; or, Nineteenth Century Witchcraft." It contains a brief but remarkably complete history of magic art from the earliest times to the present date, especial attention being given to amusing incidents in the careers of celebrated necromancers.
This Introduction will be found one of the most entertaining parts of the present book. Mr Evans has also contributed two chapters — one on "^ Shadowgraph y," or "Treweyism," as it has been called, in honour of M. Felician Trewey, the classic exponent of the art; the other on "Mental Magic," or second-sight experiments.
The chapter on " Shadowgrapliy " is not only interesting because of the expose of the art of theatrical silhouette-making but on account of the sketch of the life and adventures of M. Trewey, who is a personal friend of the writer. Mr Evans is also the compiler of the excellent Bibliography which concludes the book. Though this Bibliography makes no pretence to absolute completeness, it is believed to be more extensive than any other bibliography of the subject, and it will be found of great value to the student of psychology, as well as to the student of modern magic.
Other acknowledgements are due to Mr William E. Eobinsou, the well-known j^restidigitateur, for many suggestions and favours and for important help in connection with tlie Bibliography; Mr Eobinson having a very remarka])le collection of books upon magic, which he has gathered at home and abroad during a long period. We are also indebted to Mr H. J. Iurlingame, of Chicago, for permission to use extracts from his writings and for assistance in the Bibliography.
the book details : Download 51  MB