Logic as the science of the pure concept 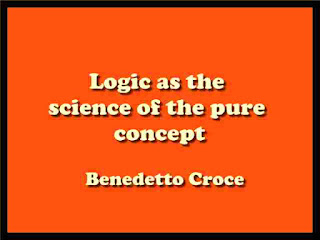 From the translator's introduction:
I have striven in every way to render the Logic the equal of its predecessors in accuracy and elegance of translation, and have taken the opinion of critical friends on many occasions, though more frequently I have preferred to retain my own.
The vocabulary will be found to resemble those of the ^Esthetic and the Philosophy of the Practical, thereby enabling readers to follow the thought of the author more easily than if I had made alterations in it.
Thus the word " fancy " will be found here as elsewhere, the equivalent of the Italian " fantasia " and " imagination " of " imagination "; this rendering makes the meaning far more clear than the use of the words in the opposite sense that they occasionally bear in English; this is particularly so in respect of the important distinction of the activities in the early part of the ^Esthetic.
I have also retained the word "gnoseology " and its derivatives, as saving the circumlocutions entailed by the use of any paraphrase, especially when adjectival forms are employed. I think that this Logic will come to be recognized as a masterpiece, in the sense that it supplants and supersedes all Logics that have gone before, especially those known as formal Logics, of which the average layman has so profound and justifiable mistrust, for the very good reason that, as Croce says, they are not Logic at all, but illogic — his healthy love of life leads him to fight shy of what he feels would lead to disaster if applied to the problems that he has to face in the conduct of life.
It is shown in the following pages that the prestige of Aristotle is not wholly to blame for the survival of formal Logic and for the class of mind that denying thought dwells ever in the ipse dixit. Indeed, one of the chief boons conferred by this book will be the freeing of the student from that confusion of thought and word that is the essence of the old formal Logic — of thought that rises upon the wings of words, like an aviator upon his falcon of wood and metal to spy out the entrenchments of the enemy.
One of the most stimulating portions of the book will, I think, be found in Croce's theory of error and proof of its necessity in the progress of truth. This may certainly be credited to Croce as a discovery. That this theory of the uses of error has a great future, I have no doubt, from its appearance at certain debates on Logic that have taken place at the Aristotelian Society within the last year or two, though strangely enough the name of the philosopher to whom it was due was not mentioned.
Alike mysterious aposiopesis characterized Professor J. A. Smith's communication to the same Society as to the development of the ethical from the economic activity (degrees of the Spirit) some years after the publication of the Philosophy of the Practical. It is my hope that this original work, appearing as it does in the midst of the great struggle with the Teutonic powers, may serve to point out to the Anglo-Saxon world where the future of the world's civilization lies, namely in the ancient line of Latin culture, which includes in itself the loftiest Hellenic thought.
It is sad to think that the Germans have relapsed to barbarism from the veneer of cultivation that they once possessed, particularly sad when one comes upon the German names that must always abound in any treatise on the development of thought.
Their creative moment, however, was very brief, and the really important names can be numbered on the fingers of one hand, .that of Emmanuel Kant being corrupted from the Scot's Cant. Of recent years the German contribution has been singularly small and unimportant, such writers as Eucken being mere compilers of the work of earlier philosophers, and without originality.
The foul-souled Teuton will need a long period of re-education before he can be readmitted to the comity of nations upon equal terms — his bestiality will ask a potent purge. In conclusion, I can only hope that the fact of this work having been put into the hands of readers a decade earlier than would in all probability have been the case, had I not been fortunate enough to make a certain journey to Naples, will be duly taken advantage of by students, and that it will serve for many as a solid foundation for their thought about thought, and so of their thought about the whole of life and reality in the new world that will succeed the War.

FIRST SECTION
THE PURE CONCEPT AND THE PSEUDOCONCEPTS
AFFIRMATION OF THE CONCEPT ..... 3
Thought and sensation — Thought and language — Intuition and language as presuppositions — Scepsis as to the concept — Its three forms — ^Estheticism — Mysticism — Empiricism — Reductio ad absurdum of the three forms — Affirmation of the concept. II
THE CONCEPT AND THE PSEUDOCONCEPTS . . .19
Concept and conceptual fictions — The pure concept as ultra- and Omni-representative — Conceptual fictions as representative without universality, or universals void of representations — Criticism of the doctrine which considers them to be erroneous concepts, or imperfect concepts preparatory to perfect concepts — Posteriority of fictional concepts to true and proper concepts — Proper character of conceptual fictions — The practical end and mnemonic utility — Persistence of conceptual fictions side by side with concepts — Pure concepts and pseudoconcepts.

THE CHARACTERISTICS AND THE CHARACTER OF THE CONCEPT 40
Expressivity — Universality — Concreteness — The concrete-universal and the formation of the pseudoconcepts — Empirical and abstract pseudoconcepts — The other characteristics of the pure concept — The origin of multiplicity and the unity of the characteristics of the concept — Objection relating to the unreality of the pure concept and the impossibility of demonstrating it — Prejudice concerning the nature of the demonstration — Prejudice relating to the representability of the concept — Protests of philosophers against this prejudice — Reason of their perpetual reappearance.
DISPUTES CONCERNING THE NATURE OF THE CONCEPT 58
Disputes of materialistic origin — The concept as value — Realism and nominalism — Critique of both — True realism — Resolution of other difficulties as to the genesis of concepts — Disputes arising from the neglected distinction between empirical and abstract concepts — Intersection of the various disputes — Other logical disputes — Representative accompaniment of the concept — Concept of the thing and concept of the individual — Reasons, laws and causes — Intellect and Reason — The abstract reason and its practical nature — The synthesis of theoretical and practical and intellectual intuition — Uniqueness of thought.
CRITIQUE OF THE DIVISIONS OF THE CONCEPTS AND THEORY OF DISTINCTION AND DEFINITION . . 72
The pseudoconcepts, not a subdivision of the concept — Obscurity, clearness and distinction, not subdivisions of the concept — Inexistence of subdivisions of the concept as logical form — Distinctions of the concepts not logical, but real — Multiplicity of the concepts; and logical difficulty arising therefrom. The necessity of overcoming it — Impossibility of eliminating it — Unity as a distinction — Inadequacy of the numerical concept of the multiple — Relation of distinct as ideal history— Distinction between ideal history and real history — Ideal distinction and abstract distinction — Other usual distinctions of the concept, and their significance — Identical, unequal, primitive and derived concepts, etc. — Universal, particular and singular. Comprehension and extension — Logical definition — Unity-distinction as a circle — Distinction in the pseudoconcepts — Subordination and co-ordination of empirical concepts — Definition in empirical concepts, and forms of the concept — The series in abstract concepts.
the book details : Download 20.5 MB