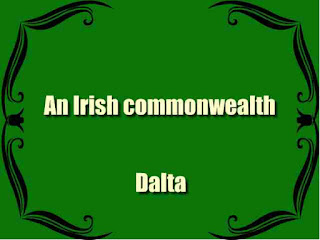 From the introduction:
An English. Attorney-General in Ireland, Sir John Davies, writing in the reign of James I. said: ' There is no nation under the sun that love equal and indifferent justice better than the Irish, or will rest better satisfied with the execution thereof, although it is against themselves." Sir John Allen, English Master of the Bolls in Ireland, wrote to the Lord Deputy, Sir Anthony St. Leger, in 1537, that he " had been of this opinion ere now, that the Irish were more .conformable to good order than diverse of the King's subjects, and kept their troths better."
A still earlier writer, in the days of Henry VII., had reported: ' The laws and statutes made by the Irish -on their hills they keep firm and staple, without breaking them for any favour or reward." The law so made and kept by the Irish was a national code of great antiquity. It was developed during centuries, by a people distinguished for their law-abiding character.
It has been described by Goldwin Smith, Professor of History at Oxford University, as " a precise and elaborate code, displaying something of that peculiar aptitude for the forms of legislation which the French Kelt has displayed in the Code Napoleon."
It was expounded by trained lawyers, but it rested on the will of the whole people and was the expression of their natural love of justice and freedom. As Mrs Green has said in a memorable phrase, ' ' the Irish people were themselves the guardians of their law and of their land." " There are four dignitaries of a territory who can be degraded," says the Senchus MOT, "a false- judging king, a stumbling bishop, a fraudulent poet, and an unworthy chieftain who does not fulfil his duties." According to Dr Sigerson, There were two orders which took an equal rank with royalty: the order of learning as represented by a doctor of laws, and the order of religion as represented by a bishop. These being the king's equals, acted as a check upon his executive power.
The code which ruled Ireland from the fifth to the seventeenth century was compiled and confirmed in a council composed of three kings, three bishops, and three doctors learned in-laws. ... The chieftain of territory was chosen by the tribe as their principal or agent for certain purposes, and they endowed him with certain prerogatives.
They could depose him for what the law defined as false judgment, and the office did not lapse as of right to his eldest son or to any of his children. He was a prince of the Irish, a ' Chieftain of the men of Erinn,' but not a lord of the soil as now understood, with a right of ownership in the land so absolute as to mean occasionally supreme mastery over the lives and fortunes of its in- habitats." The chief had for his support by virtue of his office a portion known as " mensal land," which when he died or ceased to be chief went by tanistry to his successor; and the nobles also held portions of land which descended to their children.
The professional men judges, physicians, poets, historians, and artificers were also given portions of land in remuneration for their services. Parts of the land so held were left to tenants paying rent in kind. But all the rest, and by far the larger part, of the cultivated land, belonged to the people as a whole and was called the " tribe land." Every free man had a right to his share of this land, paying to the chief a subsidy according to his means, and owning his stock- cows and sheep, horses and oxen or hiring it from the chief.