The influence of Greek ideas and usages upon the Christian church 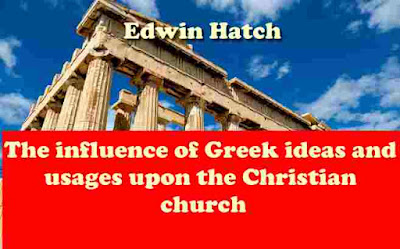 Edwin Warren Hatch was an English theologian. He is best known as the author of the book Influence of Greek Ideas and Usages Upon the Christian Church, which was based on the lectures he presented during the 1888 Hibbert Lectures and which were edited and published following his death.
From Preface:
The Hibbert Trustees cannot add this volume to their series without a few lines of grateful acknowledgement. It is impossible to forget either the courteous readiness with which the accomplished author undertook the task originally or the admirable qualities he brought to it. When he died without completing the MS. for the press, the anxiety of the Trustees was at once relieved by the kind effort of his family to obtain adequate assistance.
The public will learn from the Preface how much had to be done and will join the Trustees in grateful appreciation of the services of the gentlemen who responded to the occasion. That Dr Hatch’s friend, Dr Fairbairn, consented to edit the volume, with the valuable aid of Mr Bartlet and Professor Sanday, was an ample pledge that the want would be most efficiently met.
To those gentlemen, the Trustees are greatly indebted for the learned and earnest care with which the laborious revision was made,