Little Journeys to the homes of the great 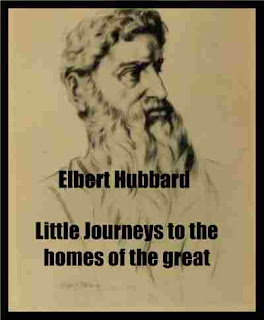 Excerpt from Moses:
Moses was the world's first great teacher. He is still one of the world's great teachers. Seven million people yet look to his laws for special daily guidance, and more than two hundred millions read his books and regard them as Holy Writ. And these people as a class are of the best and most enlightened who live now or who have ever lived.
Moses did not teach of a life after this — he gives no hint of immortality — all of his rewards and punishments refer to the present. If there is a heaven for the good and a hell for the bad, he did not know of them. <IThe laws of Moses were designed for the Now and the Here. Many of them ring true and correct even today, after all this interval of more than three thousand years. Moses had a good knowledge of physiology, hygiene, sanitation. He knew the advantages of cleanliness, order, harmony, industry and good habits. He also knew psychology or the science of the mind: he knew the things that influence humanity, the limits of the average intellect, the plans and methods of government that will work and those which will not. He was practical. He did what was expedient.
He considered the material with which he had to deal, and he did what he could and taught that which his people would and could believe. The Book of Genesis was plainly written for the child-mind. The problem that confronted Moses was one of practical politics, not a question of philosophy or of absolute or final truth.
The laws he put forth were for the guidance of the people to whom he gave them, and his precepts were such as they could assimilate. It was easy to take the writings of Moses as they have come down to us, translated, re-translated, coloured and tinted with the innocence, ignorance and superstition of the nations who have kept them alive for thirty-three centuries, and then compile a list of the mistakes of the original writer. The writer of these records of dreams and hopes and guesses, all cemented with stern commonsense, has our profound reverence and regard.
The " mistakes " lie in the minds of the people who, in the face of the accumulated knowledge of the centuries, have persisted that things were once written were eternally sufficient
In point of time, there is no teacher within many hun- dred years following him who can be compared with him in originality and insight. Moses lived fourteen hundred years before Christ. The next man after him to devise a complete code of conduct was Solon, who lived seven hundred years after. A little later came Zoroaster, then Confucius, Buddha, Lao-tze, Pericles, Socrates, Plato, Aristotle  — contemporaries, or closely following each other, their philosophy woven and interwoven by all and each and each by all. Moses, however, stands out alone. That he did not know natural history as did Aristotle, who lived a thousand years later, is not to his discredit, and to emphasize the fact were irrelevant. Back of it all lies the undisputed fact that Moses led a barbaric people out of captivity and so impressed his ideals and personality upon them that they endure as distinct and peculiar people, even unto this day. He founded a nation. And chronologically he is the civilized world's first author.
the book details : Download 17.8 MB