How to get things done 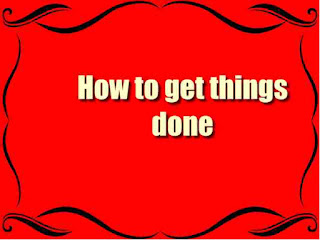 A book of suggestions of executives

From Preface:
This book is the first one that under- takes to develop a technique of ACTION. We have had "inspirational" books that cast a glamour over "Action". We have had our "Do It Now" mottoes. We have had eulogies of the men -who do things. But we have not had a book that might fairly be called a textbook on the action in business life. Northcliffe once said to me, as he said, I believe, to almost everyone — "You see, I am the one man in England who can get things DONE."
This was his proudest description of himself. All through his vivid life, he was a man of action. He not only acted. He plunged. He made mistakes and forgot them. He built up, not only a sphere of national influence but one of our largest profit-making organizations as well. I do not say in this book that any young man can become a Northcliffe — ^nothing as foolish as that. I do not say that any young man can climb to the top; but I do say that if he learns how to ACT — how to be practical, he can climb higher. He can make better use of his abilities and receive a greater reward. A writer in a London Sunday newspaper said
"Every tradesman is a potential Lever- Hulme. Every man has in his circumstances the chance of becoming the new Rockefeller." Such a statement is, of course, sheer rubbish. It is not true that anybody can, even by the greatest possible effort, become a Leverhulme or a Rockefeller. It does not do any good to make such statements.
The truth is always more helpful than wild exaggeration. The truth is that every man has his limitations, but he does not know what they are until he develops his powers and does his best. Any little lad in a school playground may become a Leverhulme or Rockefeller, but to say that any lad can become a millionaire Business- Builder is nonsense. As well might it be said that any lad can become a great artist or a great musician? Any lad can make the most of himself

I HAVE A DEFINITION AND A FORMULA 15
II THE ACTION HABIT OF MIND 33
III MUDDLING AND SLOWING DOWN .49
IV CREATIVE ACTION IN MANAGEMENT 65
V THE TECHNIQUE OF SMALL JOBS. 95
VI CAREER-MAKING ACTS, -115
VII ACTION-HABITS . . . I29
VIII THE PREVENTION OF ACTION BY
GOVERNMENTS . . -137
the book details : Download 2.5 MB