A French mother in wartime 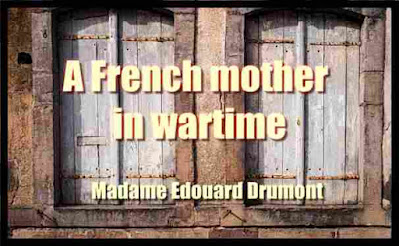 being the journal of Madame Edouard Drumont

Close as our relations with France have been of late years, it is still very hard for most English people to grasp the mentality of the French nation, and fully to understand the point of view from which a French person looks at passing events. It has therefore been thought that a translation of this Journal of Madame Drumont, the wife of the well-known editor of the Libre Parole, might be of interest to English readers, as giving them such an insight.
The Journal speaks for itself and needs no comment, but it may be useful to state that M. Drumont is an Imperialist in politics and that Paul, who figures so largely, is Madame Drumont 's son by a former marriage.
In spite of the state of my health, I am delighted to write the few lines for which I have been asked as a preface to this volume. When I lived at Soisy-sous-lfetiolles, where were spent the few hours of happiness that I have known in my life, the young hero who today is facing the greatest dangers with valiant cheerfulness was growing up under my eyes. I used to correct his translations and his exercises, and I must own that he did not take kindly to Latin and Greek.
To me he confided his earliest dreams and ambitions. He was always attracted by the lure of the Unknown, by the desire to mingle with the universe," and he has at length realized his dreams, in spite of his mother's entreaties and fears. In fine, he was modern in the fullest acceptance of the word. While he was still at school at Beauvais, he made with his own hands the first machine in which he was to soar through the air.
To the men of our time who are already weighed down with years, it is marvellous to see springing up around them a race who are totally different to the men of their generation. It will be absolutely astounding to those who have lived through these times to realize the transformations which have taken place around them.
As a writer I have been a keen and interested observer of the manners of our times, and who, I ask, would recognize the frivolous, shallow women, so passionately fond of dress and amusement, that I used to describe, in the splendid women of today who have given so many proofs of devotion to the sick and wounded? She who has written this book has been, like me, a faithful portrayer of the vagaries of fashion.
Our readers will remember the sparkling articles in which she delighted to sketch its passing phases, how she made us see the shimmer of the silks, and gave us every detail of the toilettes for which our Parisians are unequalled. She foresaw no more than I did that these pleasure-lovers would become when they had donned the nurse's cap, the devoted women whom we see lavishing so much care on the martyrs of the war. Who would have thought that those devotees of the Tango, with their insatiable thirst for amusement, would have turned into the soldiers we now see at the front, always good-tempered under a constant rain of shells, and gaily facing all the trials and sufferings of a severe winter.
!the book details :
Download 5 MB